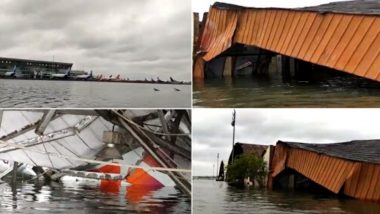 Kolkata, May 21: Cyclone Amphan created havoc in the city causing huge damage to properties. Visuals from Kolkata Airport showed a flooded tarmac, runways and hangars. All the operations at the airport were shut till 5 am on Thursday. As per the video shared on social media, the entire Airport area can be seen flooded and in one area, the roof seemed to have caved in.

The cyclonic storm, which made landfall in West Bengal on Wednesday afternoon caused severe damages in Kolkata, Howrah, Hooghly, North and South 24 Parganas districts and their nearby areas. The wind ranged with a speed from 155 to 185 kmph, accompanied by heavy rainfall. This caused damage to roofs, walls and several trees got uprooted. Cyclone Amphan Videos: Netizens Share Terrifying Footage And Images as Cyclonic Storm Wreaks Havoc in West Bengal.

Here's the video of Kolkata Airport being flooded:

Majority of the areas in North 24 Parganas faced massive power cuts due to heavy rainfall. Roofs of thatched houses were blown away, electric poles were twisted owing to the massive cyclone. According to the latest update from IMD,  Amphan weakened into a cyclonic storm on Thursday. Cyclone Amphan is currently moving north-northeastwards and may cause heavy rains in Assam and Meghalaya today.

(The above story first appeared on LatestLY on May 21, 2020 11:17 AM IST. For more news and updates on politics, world, sports, entertainment and lifestyle, log on to our website latestly.com).