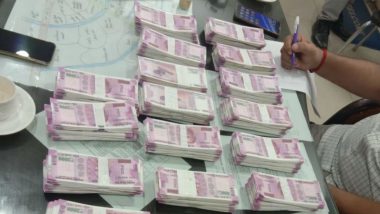 In the wake of Assembly polls in Assam and West Bengal, the vigil on the Indo-Bangladesh border has been stepped up to prevent cross-border smuggling of FICN, top Intelligence sources revealed to IANS.

After a series of huge seizures of FICN in Nepal in recent years, Dawood Ibrahim's operatives based in Kathmandu and border areas of Nepal-Bihar and Nepal-UP, shifted their operations to Bangladesh. TMC MLA Jitendra Tiwari Joins BJP Ahead of West Bengal Assembly Elections.

Dash, who led the country's top revenue intelligence agency in busting several international modules of FICN gangs till mid-2019, said that high-quality fake currency notes cannot be detected by the naked eye. "Currency notes are usually of Rs 2,000 denomination and seem to have been printed at hi-tech printing facility, probably in Pakistan, as during one of the seizures of FICN at Kathmandu airport, the concerned flight had originated from Pakistan," the former DRI chief added.

Over the years, the Malda district in West Bengal has become the hub of FICN smuggling. Its proximity to the Bangladesh border, good road and rail connectivity makes it a hotspot for such nefarious operations. Besides Malda, two other districts of Bengal, Murshidabad and Nadia have also seen a rise in smuggling of fake currency notes. Border Security Force(BSF) sources said that while high-quality FICN reportedly comes from Pakistan, low-quality counterfeit notes are being printed across the border.

During elections extra vigil is maintained by security forces on the West Bengal-Bangladesh border to prevent FICN smuggling and criminal activity."From small time criminal gangs to aides of underworld syndicates all of them have a network in Malda, " said Rajnikant Mishra, former Chief of Border Security Force(BSF). West Bengal Assembly Elections 2021: BJP Will Stop Cow Smuggling in Bengal if Voted to Power, Says UP CM Yogi Adityanath at Malda Rally.

"Malda is certainly the hub but International crime syndicates opt for different routes to pump FICN into India. From Sri Lanka FICN is smuggled into Kerala and from Dubai it lands in Mumbai," Rajnikant Mishra, former DG, BSF told IANS.

Shortly before the lockdown in 2020, Javed Ghulamnabi Sheikh, a key operative of the Dawood Ibrahim gang, was arrested from Mumbai airport with high-quality fake Indian currency notes worth over Rs 23 lakh.

During his interrogation, Sheikh revealed to the agencies that the logistics in the entire operation were provided to him by local gangster Akbar Hussain.

Unravelling the entire deal, the National Investigation Agency(NIA) rounded up Hussain in December, 2020. NIA sources said that currency notes were printed in Pakistan and later smuggled into Mumbai via Dubai. Hussain was the point person for further distribution of high-quality notes in the country.

(The above story first appeared on LatestLY on Mar 02, 2021 10:26 PM IST. For more news and updates on politics, world, sports, entertainment and lifestyle, log on to our website latestly.com).