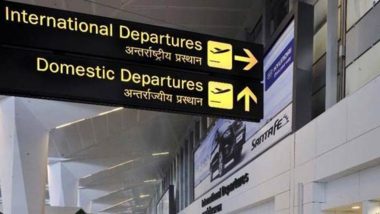 New Delhi, November 4: Security at Delhi's Indira Gandhi International (IGI) airport has been enhanced after receiving a call threatening terror attack. According to initial reports, two London-bound Air India flights could be targetted tomorrow i.e. November 5. IGI airport in Delhi is one of the most business airports in the country. Terror Attack Averted in Delhi, Police Arrest 3 Suspected ISIS Terrorists With IED.

Those who made the call said they would not let the Air India flights reach London. Subsequently, security has been increased in and around the airport. "We have got inputs that Sikhs For Justice (SFJ) has threatened that two Air India flights scheduled for London tomorrow won't be allowed to operate. The security has been tightened," DCP Rajeev Ranjan told ANI. This comes a day after the United Kindom raised the terror threat level from "substantial" to "severe".

The Joint Terrorism Analysis Centre (JTAC), which is based MI5's headquarters in London and consisted of counter-terror experts from the police, government, and security agencies, has changed the UK national terrorism threat level to "severe", the British government said on Tuesday. It was done in the aftermath of the terror attack in Vienna last night and recent incidents of violence in France.

Four people were killed and 17 others injured when gunmen opened fire in six different locations in the Austrian capital of Vienna around 8 pm on November 2. The Vienna shooting comes days after a string of recent terror attacks in France. On October 16, middle-school teacher, Samuel Paty was beheaded by an 18-year-old Abdullakh Anzorov inside a school near Paris.

Paty was killed for showing cartoons of the Prophet Muhammad to his students during a class on freedom of speech. Then on October 29, Brahim Aouissaoui, a 21-year-old Tunisian man, stabbed three people to death inside the Notre-Dame Basilica in the city of Nice.

(The above story first appeared on LatestLY on Nov 04, 2020 04:31 PM IST. For more news and updates on politics, world, sports, entertainment and lifestyle, log on to our website latestly.com).