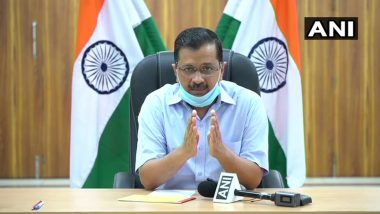 Addressing a press conference, Kejriwal said that after the spurt of cases in the national capital, the Delhi government had options to either impose another lockdown or fight the virus. "We decided to fight it and a plan was made and five weapons were prepared to fight it," he added. Delhi Following 'Very Aggressive' COVID-19 Testing, Conducted Highest Number of Tests on June 26, Says CM Arvind Kejriwal.

The Chief Minister said that the capital city currently has the capacity of 13,500 beds, out of which 7,500 are vacant and only 6,000 are occupied. "We are arranging more beds in case the need arises in future. We will not sit idle."

Secondly, he said that testing has been increased by four times, adding that 20,000 tests are being conducted daily, the highest in the country. In total, 4,59,156 tests have been performed so far.

"Delhi conducted the highest number of tests in a single day yesterday - 21,144. We have increased testing by four times. Delhi is now following a strategy of very aggressive testing and isolation," Kejriwal added.

Earlier today, Deputy Chief Minister Manish Sisodia had said that over six lakh test kits have been procured and testing is being conducted across the capital on a large scale. Delhi Schools to Remain Closed Till July 31 Due to COVID-19 Crisis, Announces Manish Sisodia.

He further said that oximeters have been provided to all the coronavirus patients who are in home isolation to keep a check on their oxygen levels and alert the medical team if they require oxygen or need to be shifted to the hospital.

"We have also bought 4,000 oxygen concentrators to ensure that there are enough oxygen cylinders in the hospitals."

Additionally, he said that authorities have started the mammoth campaign of conducting a serological survey of 20,000 people starting from today in the capital city. It is a diagnostic method used to identify antibodies, which are created by the immune system when someone is infected with the virus.

Kejriwal further said that plasma therapy turned out to be a life-saver for people in the capital. On Friday, he said that since the start of plasma therapy at LNJP hospital, the number of deaths have reduced to less than half as compared to earlier.

(The above story first appeared on LatestLY on Jun 27, 2020 01:22 PM IST. For more news and updates on politics, world, sports, entertainment and lifestyle, log on to our website latestly.com).