The NHRC has also asked for a report on the status of the disbursement of the relief granted by the government. 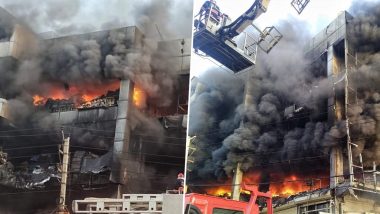 New Delhi, May 15: The National Human Rights Commission (NHRC) has taken a suo motu cognisance of the Mundka fire tragedy in the national capital that claimed 27 lives.

On Sunday, the NHRC issued notice to the Chief Secretary, Delhi government to submit a report to the Commission within two weeks, including action taken against the accountable authorities or officials. The NHRC has also asked for a report on the status of the disbursement of the relief granted by the government. Delhi Mundka Fire: 'Manish Lakra Was Inside the Building When Fire Broke Out', Says Delhi Police.

Issuing the notice, the Commission said that it has observed that this appears to be the worst case of gross violation of human rights of the victims due to utter apathy and complete dereliction of statutory duties of public servants in the national capital causing loss of lives due to fire.

Looking into the gravity of the matter and observing that the authorities appear to have least bothered on its earlier recommendations in similar incidents in the past, the Commission has also asked its Director General to send a team immediately to investigate the matter.

"According to media reports, the building had no sanctioned plan and the factory was operating without any licence. The fact has reportedly come out in an enquiry conducted by North Delhi Municipal Corporation. There are hundreds of such buildings that are operational from congested quarters with authorities struggling to curb them. There are several areas in Delhi where even fire tenders cannot enter because of rampant unauthorised constructions," said the commission in a statement.

(The above story first appeared on LatestLY on May 15, 2022 08:12 PM IST. For more news and updates on politics, world, sports, entertainment and lifestyle, log on to our website latestly.com).