Three days after a Jamia Millia Islamia university student was injured in firing, another shooting incident took place near the university. The incident of firing was reported near gate number 5 of the university. Gunshots were reportedly heard near the gate. 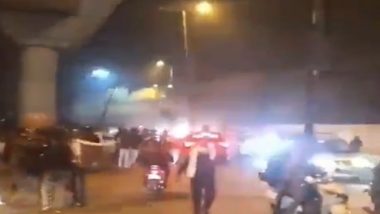 New Delhi, February 2:  Three days after a Jamia Millia Islamia university student was injured in firing, another shooting incident took place near the university. The incident of firing was reported near gate number 5 of the university. Gunshots were reportedly heard near the gate. According to Jamia Coordination Committee, two suspects came on a scooty and opened the fire. No one was reportedly injured in the incident.  Jamia Shooting: Delhi Police Files Murder Charge Against Rambhakt Gopal Sharma, Injured Shadab Farooq Being Treated at AIIMS; Here Are All Updates.

After getting the information Delhi police officials reached the spot. People gathered in protest outside the Jamia Millia Islamia University following the incident of shooting. The Delhi police launched an Investigation into the matter. As per eyewitness, one of the attackers was wearing a red jacket.

Video of People gathered Outside The University:

#WATCH Delhi: People gather in protest outside Jamia Millia Islamia University following an incident of firing at gate no.5 of the university. 2 scooty-borne unidentified people had fired bullets at the spot. SHO (Station house officer) is present at the spot. Investigation is on pic.twitter.com/EKlxQPBVum

It is the third incident of firing when the anti-CAA protesters were targetted in the national capital in the last one week. On January 29, a man identified as Rambhakt Gopal had also opened firing outside Jamia university. One student was injured in the attack. Gopal was taken into the custody by the Delhi police and an FIR was registered against him. Similarly, a shooting incident was reported at Shaheen Bagh on Saturday. A man named Kapil Gujjar opened fire at the anti-CAA protesters.

Video of the February 2 Incident:

This time by armed motorists.

Reports are no students have been injured. pic.twitter.com/dSrNmuFjbh

Today's firing took place hours after a group of locals on Sunday staged a demonstration near the anti- Citizenship Amendment Act (CAA) protest site in Delhi's Shaheen Bagh. The locals were demanding the removal of barricades from the road connecting Noida with Kalindi Kunj.

They also demanded that the people, who have been sitting on a dharna there for over a month to protest against the act, should clear the stretch as the commuters are facing difficulties. Delhi police also detained few people marching towards the anti-CAA protest site. Jamia Shooting: Amit Shah Directs Delhi Police Commissioner to Take Strict Action Against Culprit, Says Incident 'Unacceptable to Centre'.

(The above story first appeared on LatestLY on Feb 03, 2020 12:24 AM IST. For more news and updates on politics, world, sports, entertainment and lifestyle, log on to our website latestly.com).