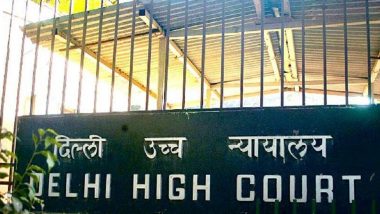 New Delhi, July 31: The Delhi High Court on Thursday rejected the petition filed by former Congress councillor Ishrat Jahan against the extension granted to the police to complete probe against her. Jahan was arrested in February this year for her alleged role in the riots of Northeast Delhi which claimed the lives of 53 people and left over 200 injured.

A trial court had, on June 15, granted the police an additional time period of 60 days to file the chargesheet against Jahan. Already in jail for the past few months, her counsel moved the High Court challenging the lower court's decision to extend the time period for filing of chargesheet. Delhi Riots Case: AAP Govt Rejects Police’s Proposed Panel of Lawyers for Arguing on Its Behalf.

The Delhi HC, after hearing both sides in a set of proceedings, reserved the verdict on July 20. The single-judge bench read out its order today, stating that all norms were adhered to be the trial court in granting the police an additional time period of two months to file the chargesheet.

The order by High Court comes amid allegations of "selective action" levelled by the police. The police department, which falls under the Ministry of Home Affairs (MHA), has been accused of not conducting an impartial probe into the riots case.

The police had drawn flak after it named activist and Swaraj India president Yogendra Yadav as an accused, but was yet to press charges against BJP leader Kapil Mishra -- whose purported video with alleged instigating remarks had emerged a day before the riots erupted.

Delhi Police Commissioner SN Shrivastava categorically denied the charge, claiming that police does not identify the accused by their religion, class or political affiliations. "You can also expect many such accusations to be motivated and coming from people who may have reasons to make false accusations," he told reporters last month.

(The above story first appeared on LatestLY on Jul 31, 2020 12:53 PM IST. For more news and updates on politics, world, sports, entertainment and lifestyle, log on to our website latestly.com).