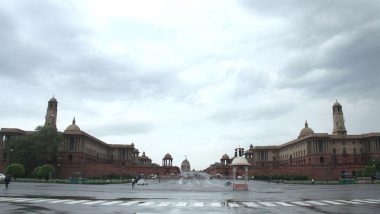 New Delhi, July 12: Residents of Delhi woke up to a cloudy morning on Sunday with the India Meteorological Department (IMD) predicting light rains for today. In its weather forecast, the weather agency has predicted 'generally cloudy sky with light rain' in the national capital for today, July 12. In its latest update, the IMD said thunderstorm with light to moderate rain with wind speed 30-60 km/ph would occur over and adjoining areas of Delhi, Faridabad, Gurugram, Meerut, Rohtak, Ghaziabad, Noida, and Greater Noida during the next 2 hours.

Even on Saturday, the cloudy skies in the national capital kept the mercury in check but high humidity was reported, which caused inconvenience to the residents.The Safdarjung Observatory had recorded a maximum of 36.4 degrees Celsius, a notch above normal. So far in July, the Safdarjung weather station has recorded 43.5 mm rainfall, which is 23 per cent less than the normal of 56.5 mm. Monsoon 2020: Normal Rainfall Predicted in India, 100% of Long Period Average, Says Govt.

The monsoon reached Delhi on June 25. The IMD has predicted normal rainfall in the national capital during the season. Reports inform that since June 1, when the monsoon season started, the city has gauged 79.4 mm rainfall against the normal of 112.1 mm -- a deficiency of 35 percent.

(The above story first appeared on LatestLY on Jul 12, 2020 08:50 AM IST. For more news and updates on politics, world, sports, entertainment and lifestyle, log on to our website latestly.com).