Drug-Resistant 'Superbug' Candida Auris, Found For The 1st Time in The Wild in India's Andaman Islands, Can Lead to Pandemic

Indian Researchers have discovered traces of a superbug fungus called Candida auris for the first time in the wild. The traces of superbug Candida auris, a multidrug-resistant organism, have been discovered on remote sandy beaches of India's Andaman Islands. 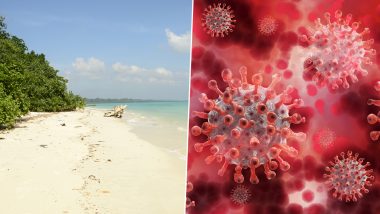 Superbug Candida Auris has been discovered on beaches and marshy lands in Andaman Islands (Photo Credits: Wikimedia Commons and Pixabay)

Port Blair, March 18: Indian Researchers have discovered traces of a superbug fungus called Candida auris for the first time in the wild. The traces of superbug Candida auris, a multidrug-resistant organism, have been discovered on remote sandy beaches of India's Andaman Islands. Candida auris, also known as C auris, can resist the main anti-fungal treatments. It has been wreaking havoc in hospitals.

According to a study in the journal mBio on March 16, C Auris isolates were collected from eight natural sites around the Andaman Islands by a team led by Dr Anuradha Chowdhary, at the University of Delhi. The team studied 48 samples of soil and water collected from the area, including sandy beaches, rocky shores, tidal marshes, and mangrove swamps. Candida Auris Fungus: What Does It Mean? Scientists Warn Deadly Fungus Could Cause Pandemic More Dangerous Than Coronavirus, Here’s Everything You Should Know.

Notably, C. auris isolates found on the beach were all multi-drug resistant. They related more to strains seen in hospitals, as compared to isolates found in the marsh. It has been observed that the C auris isolate found in the marsh was not drug-resistant. It grew more slowly at high temperatures than other isolates. This isolate is a "wilder" strain of C. auris. Coronavirus Can Survive on Skin for 9 Hours, Much Longer Than Flu Viruses: Study.

C, auris can survive on the skin before entering into the body through injuries. Once it enters the bloodstream, the organism can lead to sepsis and can cause severe illness. It can also cause bloodstream infections. The superbug was first discovered in the 1990s.

However, in 2009, it was named after the organism was spotted in a 70-year old Japanese woman. Until 2019, around 270 people in the United Kingdom have been diagnosed with the infection, according to data from Public Health England. This infection has reportedly reached all parts of the world.

(The above story first appeared on LatestLY on Mar 18, 2021 06:21 PM IST. For more news and updates on politics, world, sports, entertainment and lifestyle, log on to our website latestly.com).