The main procession was held near historic Charminar. Deputy Commissioner of Police Avinash Mohanty said no untoward incident was reported. He said the police kept a tight vigil to maintain peace and communal harmony. 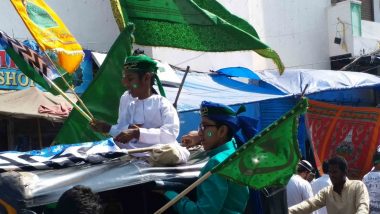 Hyderabad, November 10: Milad-ub-Nabi, the birth anniversary of Prophet Muhammad, passed off peacefully in Hyderabad and other parts of Telangana on Sunday amid tight security. Police had deployed additional forces in communally sensitive old city of Hyderabad in the wake of Saturday's Supreme Court verdict in Ayodhya title case. Personnel of Rapid Action Force and City Armed Reserve were deployed near historic Makkah Masjid and other parts of the old city to maintain law and order.

Hundreds of youth participated in the processions across the city, holding green flags and raising slogans in the praise of the Prophet. The main procession was held near historic Charminar. Deputy Commissioner of Police Avinash Mohanty said no untoward incident was reported. He said the police kept a tight vigil to maintain peace and communal harmony. Eid-E-Milad-Un-Nabi Mubarak Wishes in Hindi: WhatsApp Sticker Images, Messages, Facebook Greetings, SMS and GIFs to Share on Mawlid 2019 in Rabi Al-Awwal Month.

Processions, meetings, feeding of the poor, and blood donation camps marked the festival, celebrated with gaiety and fervour. The old city and other Muslim-majority areas in the city were decked up with huge flags, festoons, banners, welcome arches and lighting. Various religious organisations held meetings to highlight the message of the Prophet and organised 'Mahfil-e-Milad' or special gatherings in praise of the Prophet to mark the occasion.

Hundreds attended the annual meeting organised by the Majlis-e-Tameer-e-Millat, the socio-religious organisation, at the Exhibition Ground. Religious scholars and community leaders exhorted Muslims to strictly follow the holy life of the Prophet for the success in this world and hereafter.

Telangana Governor Tamilisai Soundararajan and Chief Minister K. Chandrashekhar Rao greeted Muslims on the Milad. "The life of the Prophet has been an inspiring saga of love, brotherhood and virtue to the mankind. The Prophet's mission is fulfilled when we serve our fellowmen with faith, trust, care and compassion," said Soundararajan. She hoped the birthday of the Prophet ushers in peace and goodwill. Chief Minister Chandrashekhar Rao hoped that Muslim brethren will follow the noble teachings of the Prophet and live harmoniously.

(The above story first appeared on LatestLY on Nov 10, 2019 08:43 PM IST. For more news and updates on politics, world, sports, entertainment and lifestyle, log on to our website latestly.com).