Election Commission Hits Back At Former CEC SY Quraishi, Says 'No FIRs Were Lodged in MCC Violations During His Tenure' 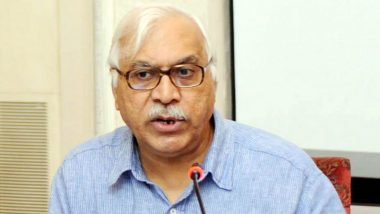 New Delhi, February 15: Reacting to former Chief Election Commissioner (CEC) SY Quraishi's critical piece, the Election Commission has written to him pointing out that no FIRs were registered under the Representation of the People Act and the IPC for violations of Model Code of Conduct (MCC) during his tenure. In a letter, Dr Sandeep Saxena, Senior Deputy Election Commissioner, listed details of cases of MCC violations between July 30, 2010, and June 10, 2012, when SY Quraishi was CEC. Election Commission to Make Political Parties Declare Detailed Info on Candidates' Criminal Cases in Electoral Affidavits, Says 'Will Implement SC Order'.

"Election Commission is planning to publish a compilation of actions taken against violators of Model Code of Conduct (MCC) in General Elections of Assembly and Parliament during last 20 years starting back from 11 February, 2020, when the results of General Elections to Assembly of NCT of Delhi were announced. A list of MCC notices issued and action taken by Commission during the period when you were holding the office of CEC is enclosed," Saxena wrote. Delhi Elections 2020: Anurag Thakur, Parvesh Verma Face EC Action For 'Provocative' Remarks, Removed From BJP List of Star Campaigners.

Saxena stated that, during Quraishi's tenure, only nine show-cause notices were issued in cases of MCC violations. Warnings were issued in only two cases, and advisories in five, and that two cases resulted in closure, he added, as reported by The Indian Express. "You may kindly like to peruse the same. It would be seen from the enclosed list that no action was taken by the then Commission during this period under section 123 of RP Act/153 IPC. It is rather ironic as how far selective amnesia can mislead the readers," Saxena wrote.

On January 8, Quraishi authored a piece under the headline A weak rebuke wherein he stated that the EC should have ordered the lodging of FIRs for hate speeches made during the Delhi assembly elections. Quraishi was referring to hateful remarks made by Minister of State (Finance) Anurag Thakur and Bharatiya Janata Party lawmaker Parvesh Sahib Singh.

"After the flurry of such hate speeches, I have been flooded with queries about the nature of the Election Commission’s (EC) response. I was asked whether the Model Code of Conduct is toothless or the EC is ineffective and whether these offences are also under the purview of other laws of the land. My answer is these offences violate not only the MCC but also the Representation of People Act (1951) and Indian Penal Code, 1860," Quraishi wrote in the piece.

"The EC flexing its muscle outside the so-called "toothless" MCC and invoking Article 324 is indeed a refreshing change. In earlier instances, it often had to let the culprits go with a mere “warning, caution or censure”. In its notice to BJP leader Anurag Thakur, the EC cited Sections 123 and 125 of the RP Act. What is baffling, however, is that if the Commission had found them guilty of offences deserving punishment, why did it stop short of filing FIRs?" he wrote.

(The above story first appeared on LatestLY on Feb 15, 2020 12:25 PM IST. For more news and updates on politics, world, sports, entertainment and lifestyle, log on to our website latestly.com).