While the man's wife, Ayesha and her mother, Suman, were declared dead in a hospital, his brother-in-law’s friend also died due to bullet injuries. His brother in law is battling for life. 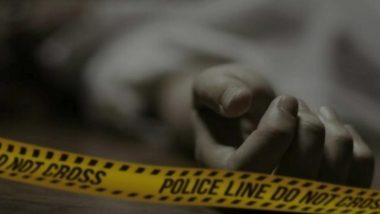 Gurugram, December 22: Police have arrested a 32-year-old man who slit the throats of his estranged wife and mother-in-law and fired at his brother-in-law and his business partner in their sleep around 2.30am on Thursday in Faridabad. Uttar Pradesh Shocker: 24-Year-Old Man Slits Wife's Throat in Saharanpur After She Insists on Visiting Her Parents

While the man's wife, Ayesha and her mother, Suman, were declared dead in a hospital his brother-in-law’s friend also died due to bullet injuries. His brother in law is battling for life. Both Gagan and Rajan were hit in the chest. The murders took place in Gothda Mohbtabad village, according to a report in The Times of India.

The accused has been identified as Neeraj. Around 2.30am on Thursday, Neeraj and his friend Lekhraj- both wielding guns- knocked on the door of the house where his wife lived. It is believed that the couple's 12-year-old son opened the door.

Neeraj first used a knife to slit the throat of Ayesha and Suman and then went to the other room and fired at Gagan and Rajan. In 20 minutes, the duo had attacked all four adult members of the house and fled, leaving the 12-year-old boy crying, police said. Cops inspecting the house claimed at least four shots had been fired from a country-made pistol.

By Sunday evening, the crime branch had arrested both Neeraj and Lekhraj. "We are questioning the two to understand what prompted them to commit the murders. An investigation is underway," said Subhe Singh, a spokesperson for the police. Gujarat Shocker: Married Man Slits Paramour’s Throat After She Pressures Him to Marry Her

The couple, sources said, had developed testy ties over a year ago. Since last year, Ayesha had been living separately from her husband. She moved into her mother's house with her son apparently because Neeraj would often accuse her of being involved in an illicit relationship.Neeraj, who sells buttons for shirts, had tried to convince Ayesha to come back home several times, but to no avail. He also had a grudge against his mother-in-law as he believed she was not allowing her to return to him.

(The above story first appeared on LatestLY on Dec 22, 2021 02:55 PM IST. For more news and updates on politics, world, sports, entertainment and lifestyle, log on to our website latestly.com).