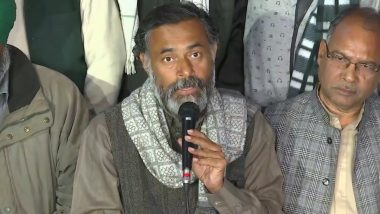 New Delhi, January 5: Farmers will tractor march at four borders of Delhi on January 7. Swaraj India chief Yogendra Yada made an announcement while addressing media. From January 6, "Desh Jagran Abhiyaan" will also be launched by the protesting farmers throughout the country. The campaign will continue for two weeks. Earlier, tractor march was scheduled to take place on January 6. Farmers' Protest: 'We Won't Consider Less than Repealing the Farm Laws', Says BKU Leader Rakesh Tikait Ahead of 7th Round of Negotiations With Govt Today.

Yadav said, "We have decided that on January 7, we will take out tractor march at four borders of Delhi including Eastern and Western peripheral. This will be a trailer for what lies ahead on January 26." He further added, "From tomorrow, for two weeks, 'Desh Jagran Abhiyan' will be started & protests will be deepened throughout the country."

We have decided that on January 7, we will take out tractor march at four borders of Delhi including Eastern and Western peripheral. This will be a trailer for what lies ahead on January 26: Yogendra Yadav, Swaraj India pic.twitter.com/qvFVDyDeOg

Krantikari Kisan Union President Darshan Pal said that Mahila Kisan Diwas would be held on January 18, while tractor parades would take place on January 25 and 25. The development came a day after the seventh round of talks between the government and 41 farmers representatives ended without any breakthrough, and the next round of talks is expected on January 8. Farmers' Talks With Centre Remain Inconclusive as Government Refuses to Roll Back Farm Laws; Next Round of Meeting on January 8.

In the sixth round of talks, the government agreed to the farmers demand to exclude them from the penal provisions of the 'Commission for the Air Quality Management in National Capital Region and Adjoining Areas Ordinance, 2020' and changes in the draft Electricity (Amendment) Bill 2020 to protect the interests of farmers. Thousands of farmers from Punjab, Haryana and western Uttar Pradesh have been protesting at the borders of the national capital demanding the repeal of the three farm laws, among other issues.

(The above story first appeared on LatestLY on Jan 05, 2021 07:19 PM IST. For more news and updates on politics, world, sports, entertainment and lifestyle, log on to our website latestly.com).