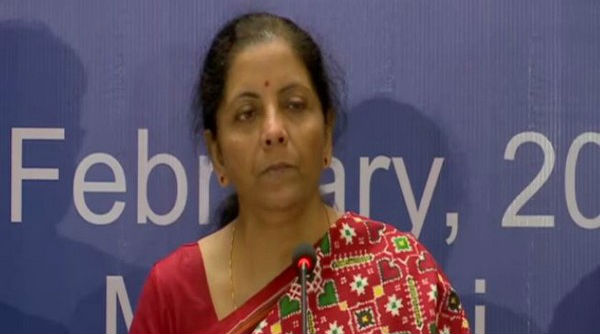 New Delhi, February 15: Finance Minister Nirmala Sitharaman on Saturday said the government is monitoring farm credit given by banks in rural areas, adding that she expects to meet the increased target of Rs 15 lakh crore for the next fiscal.

The government in Budget 2020-21 has raised the farm loan disbursal target by 11 per cent to Rs 15 lakh crore for the next fiscal and allocated Rs 1.6 lakh crore to implement various plans in agriculture and allied sectors as it chases the goal of doubling farmers income by 2022. Nirmala Sitharaman Says Govt 'Open to Feedback' From Experts on Union Budget 2020-21.

The government has allocated Rs 75,000 crore for the PM-KISAN scheme for the next fiscal, which is same as the budget estimate for this fiscal but higher than revised estimate of Rs 54,370 crore.

"Credit limit has been expanded. I am sure it is based on local ground level requirement...we expect the demand to grow and credit requirements to also meet up with it. I am actually closely monitoring banks and their extension of credit facility particularly to rural areas. So I think we'll be able to meet that," she told reporters after addressing the central board of RBI here.

The farm credit target for the current fiscal has been set at Rs 13.5 lakh crore.

Normally, farm loans attract an interest rate of 9 per cent. But the government is providing 2 per cent interest subsidy to ensure farmers get short-term farm loan of up to Rs 3 lakh at an effective rate of 7 per cent per annum. With regard to proposed mega consolidation of public sector banks, the finance minister said there was no discussion on the issue at the RBI board meeting on Saturday.

"I don't see any reason to go back or any reason which is particularly causing any delay for any notification...you will hear on it as it when it comes," she said.

Last year in August, the government announced merger of 10 public sector banks into four. United Bank of India and Oriental Bank of Commerce are to be merged with Punjab National Bank, making the proposed entity the second largest public sector bank (PSB) from April 1 this year.

It was also decided to merge Syndicate Bank with Canara Bank, and Allahabad Bank with Indian Bank. Similarly, Andhra Bank and Corporation Bank are to be consolidated with Union Bank of India. In April 2019, Bank of Baroda, in the first three-way merger exercise, amalgamated Vijaya Bank and Dena Bank with itself. Nirmala Sitharaman Allots Rs 70,000 Crore to Recapitalise PSBs on Immediate Basis, Provides Additional Lending of Rs 5 Lakh Crore to Boost Economy.