Gujarat-based businessman Sanjay Rai has set up a firewood bank at the cremation grounds on the banks of the Ganga to help poor people perform the last rites of their kin, instead of dumping the bodies in the river. 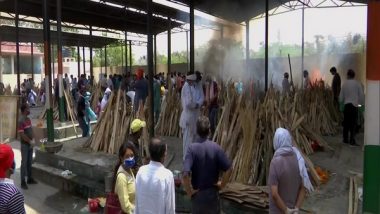 Ghazipur, May 17: Gujarat-based businessman Sanjay Rai has set up a firewood bank at the cremation grounds on the banks of the Ganga to help poor people perform the last rites of their kin, instead of dumping the bodies in the river. Rai, who is a native of Sherpur village in Ghazipur district of UP, and now residing in Gujarat, decided to start the facility after dozens of bodies were washed up on the banks of the river last week.

The bodies were apparently immersed in water after the relatives could not afford the cost of cremation. Rai was in his village when the bodies washed up, and decided to help out the poor. "People from various parts of the country called me to know the facts. The dumping of bodies as well as floating corpses in the river was upsetting" Rai said. Uttar Pradesh Tragedy: 17 Killed After Crematorium Slab Collapses on People Attending Funeral in Ghaziabad, Several Trapped.

He discussed the issue with his associates and family members and decided to launch a firewood bank on the nine cremation 'ghats' located near the river. "We informed the district administration about the plan and transported firewood, procured from the timber merchants from various parts of the districts. On May 14, the firewood banks were launched near the nine cremation grounds," he said.

Rai has got a group of volunteers who ensure maintenance of stock at the cremation grounds where poor people are given wood for the last rites from the bank without any cost.

On an average, Rs 5,000 is spent on firewood for a single pyre. Rai has so far spent close to Rs 3 lakh to cremate 60 bodies. He has been helped by family and friends in generating resources for the cause.

Ghazipur District Magistrate Mangala Prasad Singh said that Rai's contribution was praiseworthy. "His organization is also creating awareness among the villagers urging them not to dump the dead bodies in the river," Singh said.

(The above story first appeared on LatestLY on May 17, 2021 10:07 PM IST. For more news and updates on politics, world, sports, entertainment and lifestyle, log on to our website latestly.com).