In a tragic incident, eight people lost their lives after a celling of a cemetery collapsed on Sunday in Uttar Pradesh’s Ghaziabad district. The incident took place in Muradnagar area of the district. Several people are reported to be trapped under debris. 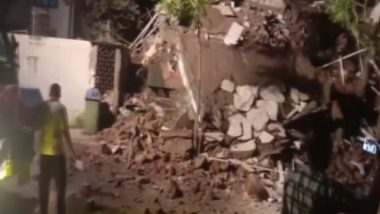 Ghaziabad, January 3: In a tragic incident, 17 people lost their lives after a roof of a cemetery collapsed on Sunday in Uttar Pradesh’s Ghaziabad district. The incident took place in Muradnagar area of the district. According to reports, people gathered for a funeral when the ceiling collapsed. Raigad Building Collapse: Death Toll Rises to 10; Several Still Trapped Under Debris.

Several people are reported to be trapped under debris. At the time of the collapsed, there were around 50 were people inside the crematorium hall. As per NDTV report, 17 people have been recovered so far. Rescue operations are currently underway. A total of 38 people have been rescued so far. Bhiwandi Building Collapse: 10 Dead & Several Feared Trapped as 3-Storeyed Building Collapses in Patel Compound Area in Maharashtra.

Senior officials have also rushed to the spot. Injured have been immediately rushed to the hospitals. Chief Minister Yogi Adityanath expressed grief over the incident.  He said, "I've instructed district officials to conduct relief operations & submit a report of incident. All possible help will be provided to those affected by the incident." More details are still awaited.

(The above story first appeared on LatestLY on Jan 03, 2021 03:47 PM IST. For more news and updates on politics, world, sports, entertainment and lifestyle, log on to our website latestly.com).