It is now learnt that 870 out of the 894 holograms are fake. Most of the fake holograms belong to liquor brands of distillery ADS Spirits Pvt Ltd. 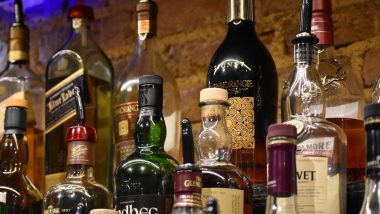 Rohtak, June 18: Police recently seized hundreds of cartons of illicit liquor in Haryana's Fatehabad and Rohtak. Cops also recovered 894 hologram of different brands of alcohol from the two locations. It is now learnt that 870 out of the 894 holograms are fake. Most of the fake holograms belong to liquor brands of distillery ADS Spirits Pvt Ltd. Haryana: 460 Cartons of Smuggled Liquor Seized from Truck in Sonipat.

Of the 894 excise adhesive labels (EALs), also called holograms, 440 were of Moonwalk, an IMFL brand of ADS Spirits, according to a report. They were sent to the Security Printing Press in Hyderabad for testing. All of them were found "not genuine". In addition, 231 holograms of Asli Santra, a country liquor brand of ADS Spirits, were also found "not genuine". Haryana Police Seizes 4,644 Bottles of Liquor Being Smuggled to Bihar, 1 Held.

Cops recovered 85 labels of another country liquor of Shahnai. However, only two of them were found genuine. Similarly, 24 labels of Fresh Malta brand, owned by ADS Spirits, were sent for testing. Of them, two were found "not genuine". The department had also sent 33 and eight holograms, respectively, of the IMFL manufactured by the same distillery for testing, but all these labels were found fake.

The department has received reports from the Security Printing Press. Officials are waiting for the police to complete their investigation in the FIRs registered in connection with the seized liquor and holograms. Once the department receives report from the police that the liquor came from the same distillery, follow-up action would be taken, a senior official said.

(The above story first appeared on LatestLY on Jun 18, 2021 12:35 PM IST. For more news and updates on politics, world, sports, entertainment and lifestyle, log on to our website latestly.com).