Speaking at the event, PM Modi asked the audience in Uri: The Surgical Strike style: "How's the josh?" 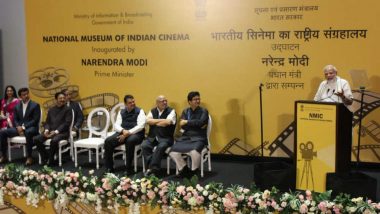 Mumbai, January 19: Prime Minister Narendra Modi on Saturday quoted a dialogue of Vicky Kaushal starrer film Uri: The Surgical Strike at the inaugural event of the National Museum of Indian Cinema in Mumbai. Speaking at the event, PM Modi asked the audience in Uri: The Surgical Strike style: "How's the josh?" In the viral video of the incident, members of the film fraternity can be heard saying, "High sir."

In movie Uri: The Surgical Strike, Vicky Kaushal plays the role of an Indian commando who is involved in the 2016 surgical strikes. Ahead of the operation, he is seen asking his team, "How's the josh?", and gets reply "High sir". PM Modi asked the same question as he inaugurated India's first National Museum of Indian Cinema. He was met with applause as well for asking the Uri-style question. Uri: The Surgical Strike Full Movie in HD Leaked on TamilRockers for Free Download!

#WATCH: PM Modi asks "How's the josh?" at the inauguration of National Museum of Indian Cinema in Mumbai. The audience responds with "High Sir" pic.twitter.com/Da3y1xUiuP

PM Modi said the medium of films is a "silent power" that can quietly influence the peoples thought process and contribute to bringing out major social changes and boost development in the country. He said without the viewers even realising it, films change their thinking process, as movies and society are "reflections" of each other. PM Narendra Modi Ups Ante Against Grand Alliance Amid Opposition Show of Strength in Kolkata.

"Films are identified with social changes... They have the knack to catch the future developments. Films help integrate our people who speak hundreds of different languages and thousands of dialects, the vastly diverse cultures, boost tourism in a big way and help generate employment opportunities, thus contributing immensely to the nation-building process," Modi said.

Moreover, he pointed out that Indian films represent the country around the world, show a ‘mirror' to the people outside, help improve our image globally, with our films, music, songs, stars creating a long-lasting impact in many countries.

Besides, he said films with social messages like the need for toilets can catch the popular imagination and many filmmakers are already making a conscious effort in this direction, plus science and development, integrating films and theatre and other aspects of modern times.

(The above story first appeared on LatestLY on Jan 19, 2019 09:31 PM IST. For more news and updates on politics, world, sports, entertainment and lifestyle, log on to our website latestly.com).