Hyderabad Shocker: Youth Dies After Electric Wire Falls on Him in Bholakpur Area

A youth was electrocuted after a live wire snapped and fell on him here, sources said on Saturday. 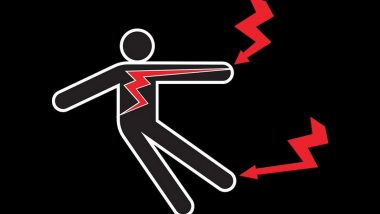 Hyderabad, June 25: A youth was electrocuted after a live wire snapped and fell on him here, sources said on Saturday.

The incident occurred in Bholakpur area of the city on Friday night. The teenager was riding a motorbike.

According to police, the wire got entangled into a DCM van and snapped. The live wire fell on the youth who was riding the two-wheeler behind the van. Mumbai Shocker: Woman Loses Eyesight After Undergoing Cataract Surgery at RN Cooper Hospital, Family Allege Medical Negligence; Hospital Refutes Claim.

The boy died on the spot. He was identified as Mohammed Sameer. He was son of a samosa seller Mohammed Qadeer. Sameer was returning home after collecting dues from some hotels for samosas supplied by his father.

Local residents alleged that negligence by the electricity authorities led to the tragedy.

Musheerabad police registered a case and took up investigation.

(The above story first appeared on LatestLY on Jun 25, 2022 12:58 PM IST. For more news and updates on politics, world, sports, entertainment and lifestyle, log on to our website latestly.com).