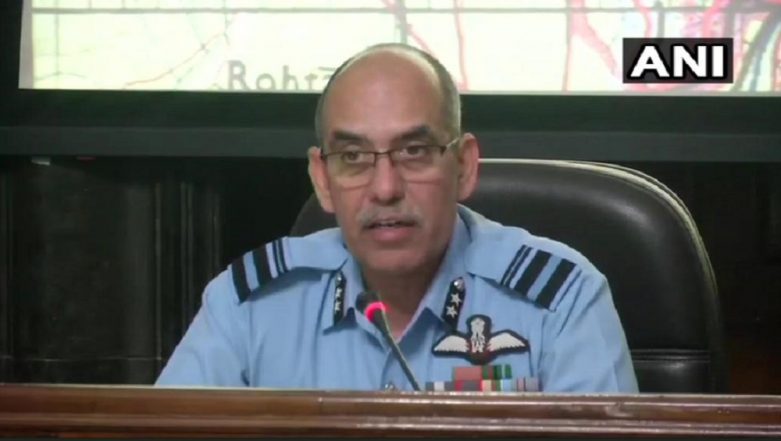 New Delhi, April 8: The Indian Air Force (IAF) said on Monday it has more credible information and evidence to prove that Pakistan Air Force (PAF) had lost an F-16 in air battle over Line of Control (LoC) on February 27 apart from electronic intercepts, radio transcripts and sightings from ground posts but was withholding them due to confidentiality and security concerns. Holding a second briefing in two days, IAF's assistant chief of staff Operations (space) R.G.K. Kapoor said that multiple evidences show that two aircraft went down on February 27 a day after IAF carried out air strikes on Jaish-e-Mohammad (JeM) camp in Pakistan's Balakot.

Air vice marshal Kapoor said that radar images showed that an F-16 crashed and fell across the LoC in Pakistan Occupied Kashmir after being shot by Mig 21 Bison flown by Wing Commander Abhinandan Varthman who also took a hit and got captured after the dogfight. He said that two Army posts in the Jhangar sector under Nowshera brigade saw two separate parachutes, the first on the western side in general area Sabz Kot and the second on the southwest in general area Tandar. The two locations are around 8-10 km apart. IAF Says Pakistani F-16 Was Shot Down in February 27 Dogfight, Refutes US Media Report.

#WATCH: Air Vice Marshal RGK Kapoor in the radar images shows the location of the shooting down of F-16 of Pakistan Air Force (PAF) by Indian Mig piloted by Wing Commander Abhinandan pic.twitter.com/CPuf2qf0nT

The parachute that fell in Sabz Kot was of the PAF pilot while Abhinandan fell in Tandar. These facts are corroborated by Pakistan army's propaganda wing director general Inter Service Public Relation (DGISPR) who first acknowledged that two pilots were captured but later retracted that only one Indian pilot was in custody.

The radar images and intercepts also corroborated the facts, said IAF emphasising that it had more proof, but it not being shared due to security concerns. The IAF had briefed the media on Friday giving details of the air engagement after a report appeared in Foreign Policy claiming none of the PAF F-16 was found missing following a count by the US official.

The report itself has been contradicted as the US defence department said it was not aware about any count of the PAF F-16 fleet. The IAF had kept silent over the entire issue, but has opened up now with two media briefings emphasising that it had shot down a PAF F-16.