Despite strict cybersecurity law, several online frauds are reported every day. In a recent, a resident of Bharatinagar in Karnataka's Bengaluru has allegedly been duped of Rs 11 Lakh in a span of ten days by one of her social media. The accused befriended the businessman's wife on Instagram. 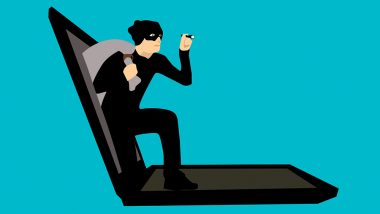 Bengaluru, December 17: Despite strict cybersecurity laws, several online frauds are reported every day. In a recent, a resident of Bharatinagar in Karnataka's Bengaluru has allegedly been duped of Rs 11 Lakh in a span of ten days by one of her social media friend. The accused befriended the businessman's wife on Instagram. The man, who identified himself as Daniel from London, cheated the woman between November 25 and December 4, the Times of India reported. Mumbai Online Fraud: Man Loses Rs 96,000 While Trying to Pay Electricity Bill Using Google Pay App.

According to a report, the 46-year-old woman got a friend request from Daniel on the Facebook-owned platform in November. They soon became friends and exchanged contact numbers. A few days later, Daniel promised her that he will send jewellery worth 62,000 pounds through a delivery company. Online Fraud in Mumbai: 40-Year-Old Businessman Accepts Facebook Friend Invite, Gets Duped of Rs 4 Lakh.

"Two days later, a man claiming to be a customs officer from Indira Gandhi International  Airport, Delhi, called me saying my gift box had arrived and I should pay Rs 55,000 to get it cleared. I transferred the money from my husband’s account. I received an acknowledgement bearing the sign and seal of customs officials,” the woman was quoted as saying by Times of India.

A day after transferring Rs 55,000, the businessman's wife got a call from Daniel who asked her to transfer Rs 2,25,000 lakh towards other expenses. Another day, a man called her saying that the gift box weights Rs 17 kg and she should pay another Rs 5,500,00 and she obliged.

When the victim was called again and asked to pay Rs 12 lakh to get a gift box, she became suspicious and asked the man to identify himself. The person disconnected the call and the woman and her family realised they were duped.

(The above story first appeared on LatestLY on Dec 17, 2019 10:49 AM IST. For more news and updates on politics, world, sports, entertainment and lifestyle, log on to our website latestly.com).