With the violent protests against the controversial CAB 2019 gaining massive support among the people in the North-East, reports are arriving that there would 48-internet ban in Assam also, starting from midnight. However, the state department has quashed the reports. 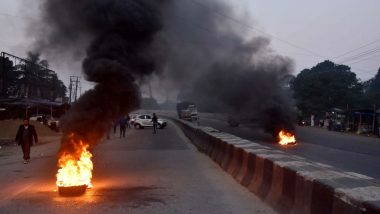 Guwahati, December 10: With the violent protests against the controversial Citizenship Amendment Bill 2019 gaining massive support among the people in the North-East, social media was abuzz with reports that there would be 48-hour internet ban in Assam, starting from midnight on Wednesday. However, the state Home Department in Assam clarified that it has no plan to suspend internet services.

Though the reports of internet ban in Assam is not official, rumours in the social media over the curb of using social media, use of SMS and mobile data is prohibited. The report by AIR News Guwahati had reported, "No plan to suspend internet services, confirm Home department officials." Citizenship Amendment Bill in Rajya Sabha Today: Will Shiv Sena, JD(U) Play Spoiler For BJP? Know The Number Game.

Here are some of the tweets circulating on social media:

@thepeeinghuman Please Cover Assam Internet Ban For 48 hours. #Assaminternetban. I'm just 7 minutes from getting deprived of internet. We need ya. The Whole of NE is burning in protests against CAB and to suppress the protests they shut the internet and I trust you Ramit Bhai.

There will be minimum 72 hour's Internet ban in Assam from midnight to stop the Protest against the BJP govt.

Do they want to create a situation like Kashmir again??? #AssamAgainstCAB #Assam#CountryAgainstBJP

We the people of Assam stand against Citizenship Amendment Bill. Our culture and ethnicity are in great threat, so now the government of India are marginalizing us by imposing a 48hrs internet ban in Assam.they don't want us to spread the truth. #NoToCAB@sidhpurohit @USCIRF

Section 144 imposed in #Guwahati.& from 12:00 AM Internet Ban in #Assam and2 continue for 48hrs. Govt is trying every possible to stop us. We will fight. @sarbanandsonwal sir,shame on you. Andolon aru hobo, raij aru ulabo apunaluk lagile ji e kori louk. Joi aai Axom. #NoToCAB pic.twitter.com/Ere1bSlW4e

There were several other allegations that various student organisations resorted to violence. Even reports of law and order situation going out of control made the headlines from Dibrugarh and Jorhat in Assam, where protesters opened fire. Due to this, exams were postponed, and shops remained closed.

Referring the CAB 2019 as biased, the protesters have been claiming that the new bill would endanger the identity of the people of the North East and endanger their social and cultural fabrication. The Union government is all set to move the CAB 2019 in Rajya Sabha on Wednesday and have set seven hours for discussion on the bill.

(The above story first appeared on LatestLY on Dec 11, 2019 12:29 AM IST. For more news and updates on politics, world, sports, entertainment and lifestyle, log on to our website latestly.com).