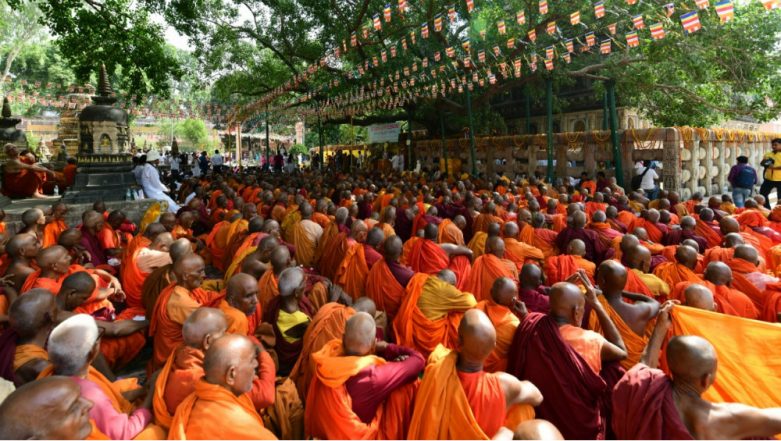 Hardline Buddhist monks in Sri Lanka have celebrated the creation of a new Buddhist entity in Ladakh. It is an optical illusion that Jammu and Kashmir has been neatly divided into Jammu, Kashmir and Ladakh, that is, Hindu, Muslim and Buddhist entities. The projection of Ladakh as purely Buddhist is odd because in the combined population of Kargil and Leh, Muslims are a majority according to the 2011 census.

New Delhi has also been keeping a steady gaze on Sri Lanka where Buddhist, Muslim and Christian factors came into play during the April 21, Easter Sunday massacre. Indian Intelligence had alerted their counterparts in Colombo as early as April 4 that a major act of terror would be executed in the island nation, possibly near Easter. When the bombs were detonated in Colombo's churches and hotels killing nearly 300 people and injuring 500 more, Indian Intelligence looked very impressive after the event. Then Intelligence agencies from the US, UK, Israel, Australia, India, all descended on Colombo with state of the art technology. Everyone was out to hold Colombo's hand. A petrified establishment, it was hoped, would fall into the Western lap. Machinations would then follow to steer Sri Lanka away from the Road and Belt Embrace. Jammu And Kashmir, Ladakh to Become Union Territories Officially On Sardar Vallabhbhai Patel's 144th Birth Anniversary.

Spanish Anthropologist, Joseba Zulaika's famous dictum is worrisome: "Counter terrorism is terrorism's best friend". Hints of terror cells in South India, the cover up in Sri Lanka, the political turnstile in the Maldives makes this Indian Ocean triangle a source of anxiety.

All the more worrisome because the current phase of terrorism is not just Muslim anger, revenge, vendetta. It has been identified as energy to be harnessed as an asset. It all began with the Afghan Mujahideen in the 80s. Just take a look at what some scholarly investigations in Sri Lanka have found.

Sniffer dogs, making a round of the Hilton hotel found nothing but the hotel staff asked the handlers to examine another branch of the hotel. At this new location something mysterious was experienced. The dogs would not stop barking in front of one room. There was some humming and hawing, and excuses by the management as to why the room could not be opened. It was occupied by employees of the US embassy. According to Dr. Michael Roberts of the University of Adelaide, Australia, when the embassy officials ultimately opened the room, Sri Lankan police found two bomb detectors which, the officials explained, were for their own safety. The overawed Sri Lanka police appears not to have pursued the obvious line of inquiry. Sniffer dogs would bark only if the detectors had been in contact with material which went into the manufacture of bombs.

One complicating factor is the divergent foreign policy preferences of the President, a votary of China's Belt and Road initiative, and Prime Minister Ranil Wickremesinghe who has exerted every muscle to sign the Status of Forces Agreement which would give the US Military a free run of an island. Note the head on conflict. The Prime Minister is keen that SOFA is signed before the Island's general elections next year.

There are some tell-tale details. I have earlier mentioned a research paper, "Weaponization of Religion" by Darini Rajasingham-Senanayake. According to her, the growing Chinese influence on the island may well have been the target of the Easter attacks.

Not only were hotels targeted which had Chinese affiliations, but the six Chinese who lost their lives were from the South China Institute of Oceanography. Western agencies would not look at this data. They were, quite tellingly, focused only on the clash of civilizations and conflicts across faiths.

Tibet, Ladakh, Bhutan, Sikkim, Mongolia, Myanmar and Sri Lanka, are all bound by Buddhism, though sometimes of distinct Mahayana and Hinayana strands. How many of these would possibly be brought into play in President Donald Trump's strategy of encircling China?

When Trump entered the White House in 2016, his avowed aim was to upturn everything Barack Obama had ever erected in the arena of foreign affairs, as in other areas. But his demoniacal desire to eradicate Obamaism from its root has run into that constant called American national interest.

The Obama-John Kerry team's priority became the nuclear deal with Iran, signed in 2015 for a reason: focusing on West Asian affairs on a daily basis was keeping the administration away from other global priorities that required urgent attention - the pivot to Asia, for instance. Despite Israel and Saudi Arabia throwing every monkey wrench at hand into the 5+1 discussions with Iran, the team determinedly concluded the deal with several objectives but one which often goes unnoticed.

Lyndon Johnson's colourful image was instructive. "It is better to have the camel in the tent, peeing out, than to leave him out peeing in." Iran was going to be part of West Asian balance of power along with Israel, Saudi Arabia, Egypt, Turkey, Qatar. Washington would then have the time to focus on Asia Pacific.

To be characteristically contrary, Trump walked out of the nuclear deal, made a mess with Europe, North Korea, raised stakes everywhere. But eventually he picked up the thread where Obama had left it: "Pivot to Asia" but only after having soiled much turf enroute. The US support to the protests in Hong Kong, playing up the Taiwan-China differences, shady US behaviour in Sri Lanka, the Economic showdown with Beijing are all part of Trump's risky, untidy "contain China" movement set by his predecessor. But with Trump you know nothing until you do. Who would have expected him to propose a meeting with President Hassan Rouhani on the margins of the UN General Assembly? Or that he would initiate direct talks with the Houthis in Yemen either with Saudi concurrence or without it, sailing above their heads? Either Prime Minister Benjamin Netanyahu will be hopping mad at this turn or he will be pleased as punch in case he was in the loop and these leaks are only designed to set up adversaries. Who knows?