Ivermectin Tablets to Be Distributed Among Uttarakhand Residents Amid Spread of COVID-19, Says State Govt

Children between 10-15 years will take only one tablet daily whereas those aged between 2 to 10 years can be administered the drug only after doctor's advice. The tablet cannot be given to children below two years, pregnant women and those suffering from liver diseases, it said. 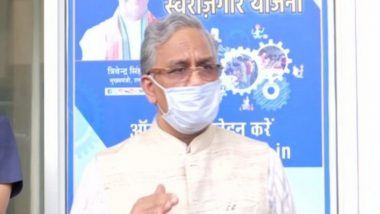 The decision was taken on the recommendation of the state-level clinical technical committee, an order issued by Chief Secretary Om Prakash to all district magistrates said. The panel has recommended the Ivermectin tablet as “mass chemoprophylaxis” to effectively control the surge of COVID-19 infection apart from the vaccination drive, the order said.

The 12 mg tablets of the drug will be distributed in a kit to all families through the health department and district magistrates, the order said. Usually, Ivermectin tablets have to be taken by adults and those above 15 years twice daily for three days after breakfast and dinner. One person will thus need six tablets and a family of four will need 24 tablets. Hence, each kit will contain two dozen tablets, the order said. Ivermectin Drug Will be Given to All People Above 18 Years in Goa to Bring Down Mortality, Says State Health Minister Vishwajit Rane.

Children between 10-15 years will take only one tablet daily whereas those aged between 2 to 10 years can be administered the drug only after doctor's advice. The tablet cannot be given to children below two years, pregnant women and those suffering from liver diseases, it said.

The kit will come with directions on how to consume the medicine and dosage for different age groups. Information related to the daily distribution of the kits should be sent to the state nodal officer, the order said.

Goa Health Minister Vishwajit Rane had on Monday said all people above 18 years will be given Ivermectin drug irrespective of their coronavirus status to bring down the number of deaths due to the viral disease.

Rane had said that people will be given Ivermectin 12 mg for five days as expert panels from the UK, Italy, Spain and Japan have found a statistically significant reduction in mortality, time to recovery and viral clearance in COVID-19 patients treated with this medicine.

On Tuesday, Karnataka Deputy Chief Minister and state's COVID task force head C N Ashwath Narayan said 10 lakh Ivermectin tablets have been procured and their supply will begin on May 14.

It has been further decided to procure 25 lakh tablets and make them available in all hospitals across the state, he said. Medical experts, however, have questioned the efficacy of the five-day duration of the drug regimen announced by Goa government saying the treatment should not be given for a short period but ideally be continued till the pandemic is brought under control. Meanwhile, the World Health Organisation has warned against the use of Ivermectin to treat COVID-19. COVID-19 Vaccine Shortage: Bharat Biotech Has Informed That It Can't Provide Additional Covaxin Doses to Delhi, Says Dy CM Manish Sisodia.

“Safety and efficacy are important when using any drug for a new indication. @WHO recommends against the use of ivermectin for #COVID19 except within clinical trials,” Soumya Swaminathan, WHO Chief Scientist said in a tweet on Tuesday.

However, regular use of the oral antiparasitic drug may significantly reduce the risk of contracting COVID-19, according to a review of available data by researchers who claim the medicine can help end the pandemic.

The research, published in the May-June issue of the American Journal of Therapeutics, is the most comprehensive review of the available data on Ivermectin taken from clinical, in vitro, animal, and real-world studies, its authors said.