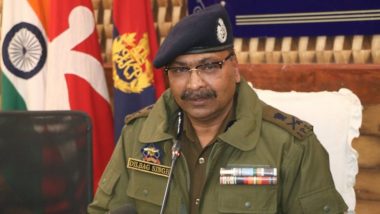 Srinagar, June 29: With the killing of Hizbul Mujahideen terrorist Masood in an encounter in South Kashmir, the Doda district has become militancy free, police said on Monday. In a joint operation in the Khulchohar area of Anantnag district by the police and the Army on Monday, a total of three terrorists was killed. These included two Lashkar-e-Taiba (LeT) terrorists, including one district commander, and one Hizbul Mujahideen commander of the name Masood. More Than 100 Terrorists Eliminated in Kashmir This Year: Nityanand Rai.

"Doda district in Jammu Zone becomes totally militancy free once again as Masood was a last surviving terrorist of the Doda District," Director General of Jammu and Kashmir Police Dilbag Singh said. The police said Masood was involved in a rape case and was absconding. He later joined the Hizbul Mujahideen and shifted his area of operation to Kashmir. Arms and ammunition, including an AK 47 rifle and two pistols were recovered from the slain terrorists. Kashmir: 'Stock LPG Cylinders' Order Triggers Speculations; Some People Spreading Rumours, Step Taken in View of Monsoon, Clarifies Govt.

"Three terrorists eliminated in the ensuing gunfight. One AK and two Pistols recovered. Joint Operation in progress," Army said in a brief statement. According to the details, the Army and police had launched a cordon and search operation (CASO) on the basis of a specific information about the presence of terrorists. As the cordon was tightened, the hiding terrorists fired at the security forces which triggered the encounter.

(The above story first appeared on LatestLY on Jun 29, 2020 10:03 AM IST. For more news and updates on politics, world, sports, entertainment and lifestyle, log on to our website latestly.com).