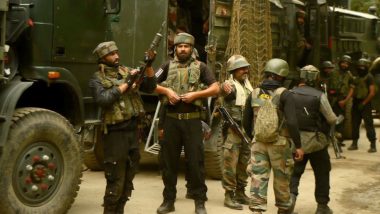 Pulwama, August 12: A terrorist was killed on Wednesday in Jammu and Kashmir’s Pulwama district by security personnel. According to reports, another terrorist was injured in the encounter. The gunfight is currently underway. A soldier also lost his life during the encounter. Initially, two soldiers were injured in the gunbattle. Jammu And Kashmir: 2 Terrorists Neutralised by Security Forces in Kulgam Encounter.

They were immediately shifted to an army hospital, where one of them succumbed to his injuries. Security forces launched a search operation in an orchard in Kamrazipora village of Pulwama in the early hours of Wednesday after receiving information about the presence of terrorists in the area. Jammu And Kashmir: Terrorist, Who Killed CRPF Jawan, 6-Year-Old Boy at Anantnag's Bijbehara, Gunned Down by Security Forces in Srinagar.

The encounter broke out after the terrorists opened fire on the personnel. The identity of the deceased terrorist is yet to be identified. More details are still awaited. In 2020, over 100 terrorists have been killed so far.

(The above story first appeared on LatestLY on Aug 12, 2020 08:43 AM IST. For more news and updates on politics, world, sports, entertainment and lifestyle, log on to our website latestly.com).