Justice S Muralidhar on Thursday received a grand farewell on his transfer from Delhi High Court to Punjab and Haryana High Court. The farewell, which was organised by the Delhi High Court Bar Association, was attended by multiple lawyers. 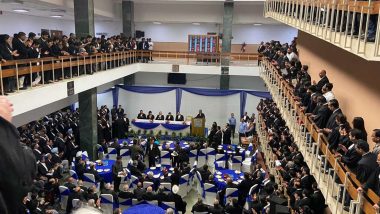 Justice Muralidhar's transfer to the Punjab and Haryana High Court raised eyebrows after he ordered Delhi Police to take immediate action on politicians who were indulged in hate speeches. The opposition had questioned the timing of transfer and accused Centre of issuing transfer orders intentionally to take judge off the case.

This is the way real heros are treated. pic.twitter.com/0duDKV2uxf

Lawyers lining up for Justice Muralidhar's farewell at the Delhi high court.

Union Law Minister Ravi Shankar Prasad, however, refuted the allegations saying that consent was taken from the judge. "Transfer of Hon’ble Justice Muralidhar was done pursuant to the recommendation dated 12.02.2020 of the Supreme Court collegium headed by Chief Justice of India. While transferring the judge consent of the judge is taken. The well-settled process have been followed," he had tweeted.

Justice Muralidhar began his law practice in Tamil Nadu's Chennai in September 1984. He later shifted to Delhi to practice at the Delhi High Court and Supreme Court of India in 1987.

(The above story first appeared on LatestLY on Mar 05, 2020 02:25 PM IST. For more news and updates on politics, world, sports, entertainment and lifestyle, log on to our website latestly.com).