Rajasthan Political Crisis: Jyotiraditya Scindia Hits Out at Congress For Sacking Sachin Pilot, Says 'No Place For Ability in Party' 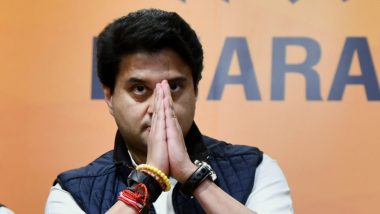 Pilot, who is at centre of the current political storm in Rajasthan, was removed from the party earlier today after he along with his loyal MLAs did not turn up for the legislative party meeting called by Chief Minister Ashok Gehlot.

Pilot, 42, was removed as the Deputy CM and also sacked as president of the Rajasthan Pradesh Congress Committee (PCC). The alleged anti-party activities and acting on "behest of BJP" were cited as charges to remove him from the posts.

Scindia, reacting to Pilot's purge, said, "In present circumstances, there is no place for ability in the Congress party. This can be seen in every state."

In present circumstances, there is no place for ability in the Congress party. This can be seen in every state: Jyotiraditya Scindia, BJP on political crisis in #Rajasthan pic.twitter.com/VNIHo3GIvg

Scindia had, a day earlier, expressed sorrow over the sidelined and "persecution" of Pilot by CM Ashok Gehlot. Referring to him as a friend and esteemed erstwhile colleague, the BJP leader said Pilot is being targeted for his talent and capability.

Political pundits are expecting Pilot to follow the footsteps of Scindia, who switched over to the BJP and succeeded in pulling down the Congress-led government in Madhya Pradesh. His next political move is expected to be revealed on Wednesday morning, when he is scheduled to address a press conference at 10 am.

(The above story first appeared on LatestLY on Jul 14, 2020 06:54 PM IST. For more news and updates on politics, world, sports, entertainment and lifestyle, log on to our website latestly.com).