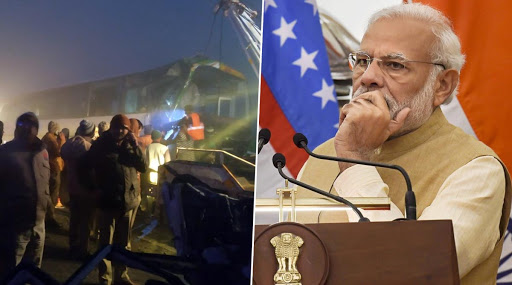 Expressing his condolences for the deceased, PM Modi took to twitter and wrote, "I am deeply saddened to know about the horrific road accident in Uttar Pradesh's Kannauj. Several people have lost their lives in the accident. I express my condolences to the bereaved families and wish speedy recovery to the injured persons." Kannauj Bus Accident: Bus Carrying 46 People Catches Fire, 20 Feared Dead.

According to unofficial reports, around 20 people are feared dead while 12 are critically injured. The police informed that the double-decker bus was carrying 46 passengers to Jaipur, when it collided with truck on GT highway. Soon after the head-on collision, the bus caught fire.

The Kannauj administration took swift action and rushed four fire engines which took 30 to 40 minutes to douse the fire in both the vehicles. In the night only, around 21 people were rescued, said a senior police officer. CM Adityanath had directed officials to ensure proper treatment of the injured.

In another incident, at least 12 people injured in collision between a bus and a car following which three more vehicles collided into the bus due to low visibility because of fog on Agra - Lucknow Expressway on Saturday morning. Injured have been shifted to trauma centre in Lucknow.