Kannauj Horror: Woman, Her Differently-Abled Friend Thrashed, Tonsured And Paraded by Villagers Over Their Friendship

A widow woman and her differently-abled friend were thrashed, tonsured and paraded by her relatives who are opposed to their friendship. 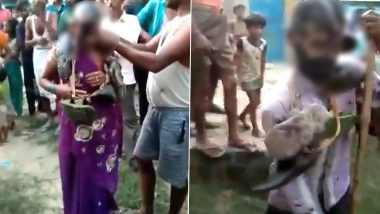 Kannauj, August 27: A widow woman and her differently-abled friend were thrashed, tonsured and paraded by her relatives who are opposed to their friendship. The incident took place a village in Uttar Pradesh's Kannauj district on Wednesday. The woman, who is 37-year-old, and her friend, who is 40 were made to wear garlands made of footwear and locals made videos of them being assaulted and shamed. UP: 6 Members of Family in Kannauj District Eat ‘Ganja Sabzi' Thinking It's Methi, Hospitalised.

According to a report by NDTV, police said the woman's husband died by suicide two months ago and the differently-abled would help her. However, the woman's relatives did not like their friendship, cops added. On Wednesday, after finding the woman and the man together, her relatives along with others allegedly shaved their heads, blackened their faces, assaulted them and paraded them with garlands made of footwear. Kannauj Horror: Father Hugs 1-Year-Old Child Who Died at Govt Hospital, His Grief Caught on Video.

A video showed the woman and her friend being paraded through a narrow lane as a large number of men and boys walk behind them. After videos of the incident went viral, a First Information Report (FIR) was registered. Police have arrested eight accused, including two relatives of the woman, and charged them with assault, causing hurt and trespassing.

(The above story first appeared on LatestLY on Aug 27, 2020 11:07 AM IST. For more news and updates on politics, world, sports, entertainment and lifestyle, log on to our website latestly.com).