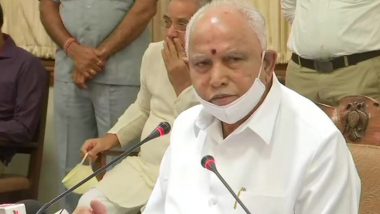 Bengaluru, July 30: Karnataka Chief Minister B S Yediyurappa on Thursday said his government was committed to providing all the infrastructure facilities to Bengaluru that has global recognition, as he flagged off the work on the underground section of the Metro Phase 2 line.

The Chief Minister today set in motion one Tunnel Boring Machine (TBM) named Urja, which will be tunneling between Cantonment and Shivajinagar stations here. "Work on all the reaches of the Metro phase-2 has begun and it is expected to be completed by 2024," Yediyurappa said. Bengaluru Metro: 80 Labourers Working on Nagavara - Gottigere Lane of Namma Metro Phase 2 Test Positive For Coronavirus.

Speaking at the event, he said Metro was playing an important role in easing traffic congestion in the city and in helping commuters reach their destination as quickly as possible, as he hoped that the projects get completed on time.

"Our government is committed to all round development of Bengaluru city. Bengaluru has been identified among the cities that are developing in a fast phase at the global level. Accordingly, providing basic infrastructure support to it is the duty of the government," he added.

The construction of the entire underground work has been divided into four packages namely RT01, RT02, RT03 and RT04, it said. Noting that under RT03, the work involves tunneling from Cantonment Station to Shivajinagar station and from Cantonment station upto Tannery Road for a length of 2.88 kms with two underground stations, a release said, the contractor M/s' Larsen and Toubro Ltd has procured two slurry based Tunnel Boring Machines (TBM) to complete the tunneling works. The names of the two TBMs are Urja and Vindhya, it added.