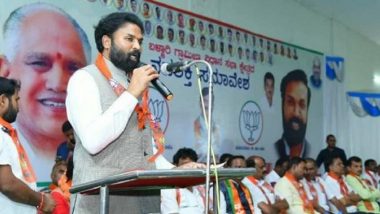 Bengaluru, August 9: Karnataka Health Minister B Sriramulu was confirmed to have contracted the coronavirus infection. The test results, which were released on Sunday, showed the Bharatiya Janata Party (BJP) leader as positive for the contagious disease. The Minister took to Twitter to inform the media and his supporters that he has been infected.

Sriramulu confirmed that he would be hospitalised for treatment of COVID-19, despite showing mild symptoms. He further added that he was actively involved in monitoring the steps to combat the disease over the past four months, which included his visit to 30 districts of the state. After Karnataka CM BS Yediyurappa, His Daughter and 6 Staffers Tested Positive for COVID-19: CMO.

Sriramulu, in a series of tweets in Kannada, expressed hope that he would recover from the disease while also praying for Chief Minister BS Yediyurappa. He also appealed to those who came in contact with him recently to self-quarantine.

Yediyurappa was tested as COVID-19 positive last week, and was subsequently admitted to the Manipal Hospital. At the same medical facility, senior Congress leader and former Karnataka CM Siddaramaiah was admitted two days later. Both the politicians are stated to be in a "stable" condition.

COVID-19 cases across Karnataka have been growing at an alarming pace, with Bengaluru crossing the 70,000-mark on Saturday. The statewide count has reached 1,72,201, including 3,091 deaths.

(The above story first appeared on LatestLY on Aug 09, 2020 05:49 PM IST. For more news and updates on politics, world, sports, entertainment and lifestyle, log on to our website latestly.com).