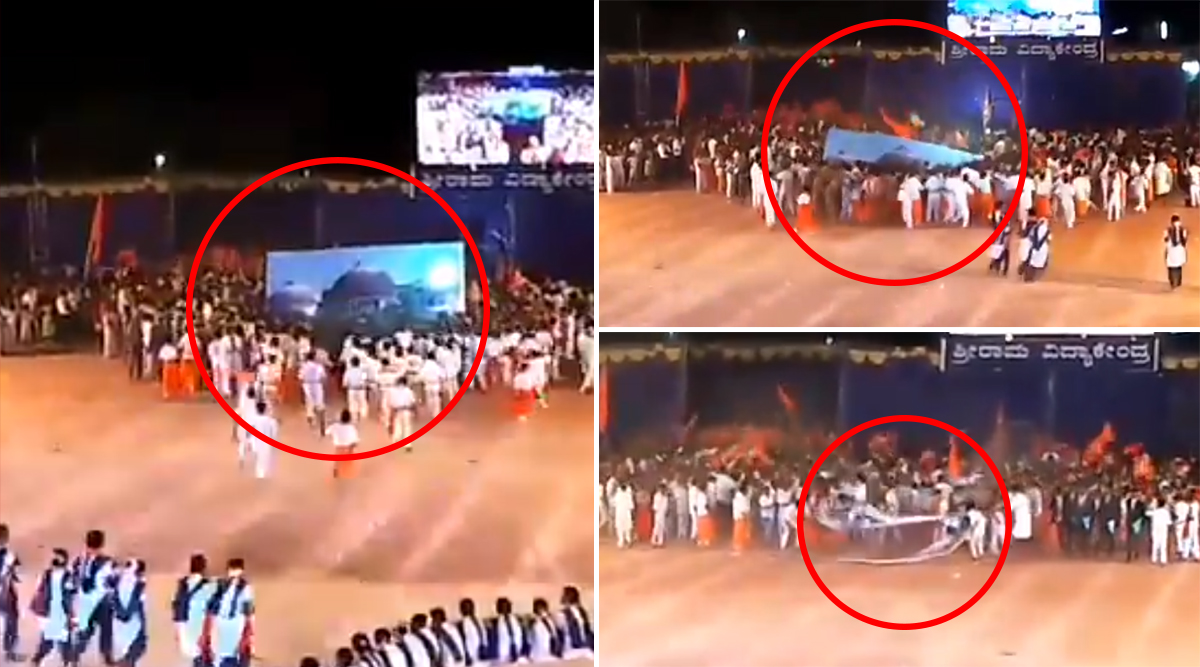 Bengaluru, December 16: A school in Karnataka made students enact the demolition of Babri Masjid as part of a play video of which has also surfaced. The drama was performed at Sri Rama Vidyakendra High School in Dakshina Kannada district’s Kalladka on Sunday. The school is owned by Rashtriya Swayamsevak Sangh (RSS) leader Kalladka Prabhakar Bhat who has a stronghold over the coastal belt of Karnataka, The News Minute reported. Union Minister DV Sadanand Gowda and Pudducherry Governor Kiran Bedi also attended the function where the play was staged. Ayodhya Verdict: Full Text of Supreme Court Judgment in Babri Masjid-Ram Janmabhoomi Title Dispute.

In the video, donning white shirts and white pants or saffron dhotis, nearly a hundred students are seen rushing towards a huge picture of Babri Masjid, as a person in the background says: "They start demolishing the structure with anything they can get their hands on. With enthusiasm, Hanuman bhaktas with Hanuman’s anger, they bring down Babri structure. Bolo Shri Ramachandra ki, Jai!" Students then tope apart the poster of Babri Masjid and jumped in excitement.

The Chief Guests for the event were Union Minister of Chemicals and Fertilizers, DV Sadananda Gowda; Puducherry Governor Kiran Bedi; and several Ministers from Karnataka. pic.twitter.com/hVdqxvfdvI

After the enactment of the demolition of Babri Masjid, students made formations in the shape of a lotus, star, Om and a Ram temple that is envisaged to come up at the disputed site in Ayodhya where Babri Masjid once stood. Apart from Gowda and Bedi, several state ministers H Nagesh and Shashikala Jolle were also present at the function. Gowda later said that he was not present when the communally-charged play was staged.

"I don’t know. I was not there when the play was enacted. I arrived at the school only at 7.30 pm and I think it was over by then. I have to know more about this before commenting," Gowda told TNN. President of the school, Satish Bhat Shivagiri, said that there was nothing communal about the play and they were simply depicting what happened in the past.