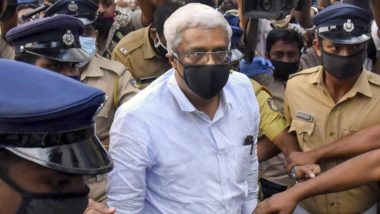 Earlier in the day, the ED took him into custody moments after his bail plea was rejected. He was detained from from the Ayurveda hospital, where he was undergoing treatment for his back-pain. Notably, Customs and the ED opposed his bail plea. Earlier this month, extended the stay on the arrest of the former Principal Secretary to the Chief Minister by the Customs and Enforcement Directorate. Kerala Gold Smuggling Case: NIA Arrests Key Absconder Rabins Hameed Following His Arrival at Kochi International Airport.

Enforcement Directorate arrests former Chief Secretary of the Kerala CMO M Sivasankar, in connection with the Kerala gold smuggling case. He will be produced the court tomorrow. https://t.co/770bF72mr3

The ED had accused Sivasankar of helping  Swapna Suresh, the main accused in the case. The National Investigation Agency (NIA) and the Customs Department are also investigating the case. The Kerala government removed M Sivasankar from the post of principal secretary to Chief Minister Pinarayi Vijayan on July 7. The case is related to the seizure of 30 kg gold worth Rs 14.82 crore on July 5 this year at Air Cargo of Trivandrum International Airport by Customs (Preventive) Commissionerate, Cochin, from the diplomatic baggage.

(The above story first appeared on LatestLY on Oct 28, 2020 11:07 PM IST. For more news and updates on politics, world, sports, entertainment and lifestyle, log on to our website latestly.com).