Punjab Chief Minister Amarinder Singh had initially refused to accept the resignation of the police officer, who was to retire in 2029. But when the former IG-rank officer remained firm on his stand, the chief minister accepted his premature retirement request. 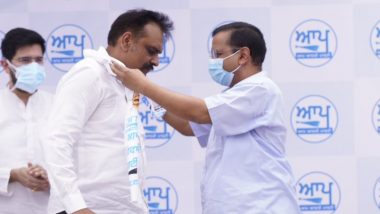 Amritsar, June 21: Former IPS officer Kunwar Vijay Pratap Singh, who was part of the SIT probing the 2015 Kotkapura police firing incident in Punjab, on Monday joined the Aam Aadmi Party here. Delhi Chief Minister and AAP national convenor Arvind Kejriwal travelled to Amritsar, where he inducted the former Punjab inspector general of police into the party ahead of the state assembly polls scheduled to be held early next year.

The former police office joined the party in the presence of state unit chief Bhagwant Mann and other senior leaders, including Raghav Chadha. Singh took premature retirement in April after the Punjab and Haryana High Court quashed a report filed by the earlier Punjab Police SIT into the Kotkapura firing incident in 2015 after the alleged desecration of the Guru Granth Sahib in Faridkot district.

He was part of the Special Investigation Team which was probing the 2015 Kotkapura and Behbal Kalan policing firing incidents. The court had then directed the state government to set up a new SIT without Singh. International Day of Yoga 2021: Delhi CM Arvind Kejriwal Launches One-Year Diploma Course in Meditation, Yoga Sciences.

Referring to the sacrilege issue and investigations led by the former police officer, Kejriwal said, “He investigated and found who were mastermind, but the entire system went against him… When he realized that, he resigned”.

“To resign from such a top post is not an ordinary thing,” he said, adding one does not even leave a peon's job. “But he left the job for the people of Punjab to see that justice is done in the case,” he said.

Kejriwal said his party would deliver 'justice' in the sacrilege issue and subsequent police firing case. He said if the AAP government is formed in Punjab, culprits will be punished and justice will be ensured in the case. “And the proof for that is the person who worked towards ensuring that has joined the AAP today,” he said.

Punjab Chief Minister Amarinder Singh had initially refused to accept the resignation of the police officer, who was to retire in 2029. But when the former IG-rank officer remained firm on his stand, the chief minister accepted his premature retirement request.

The SAD-BJP was in power in 2015 when the incidents of sacrilege and subsequent police firing took place. Welcoming the former police officer into the party fold, Kejriwal said, “Today is a day of great happiness. Kunwar Vijay Pratap has joined AAP”. “He is not a leader, neither were his parents nor his forefathers, he does not come from a political family. I am not a leader, he (Bhagwant Mann) is not a leader, our party is not a party of leaders," he said.

“We don't know how to do politics, we are here to serve the country and society. With that spirit, Kunwar Vijay Pratap is joining us,” said Kejriwal. He said even the former police officer's opponents vouch for his honesty.

“He always dedicated himself to the people. It is said that he is a police officer of common people, that is why people love him so much,” the AAP leader said. The former IG-rank officer said that when he was posted in Amritsar he did not discharge his duty merely as a police officer, "but like a family member for the people”.

“We have to give politics a new direction and a new definition. In Delhi, you have seen the work of Kejriwal ji, where people have showered him with so much love. AAP wants to empower common people,” he said. Claiming that there was an overwhelming support for the AAP, the former police officer said people will herald a political revolution.

“It will be a people's movement and that will start from the land of Amritsar. We have to work for the welfare of all sections. People have to be given justice because if it is denied, the system collapses,” he said.

Punjab, which once used to be at the forefront in all fields, has fallen behind, but we will ensure that glorious days return once again, the former police officer said.