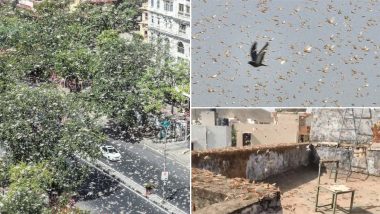 Jaipur, May 25: The locust menace spread its wings to other parts of North India, causing massive damage to crops in several states including Rajasthan, Madhya Pradesh, Uttar Pradesh, Haryana and Punjab among others. The 'tiddi dal' attack has so far wreaked havoc in parts of Rajasthan and is now believed to have entered other states, raising fear and panic among farmers. In several areas, India's indigenous drone industry came to the rescue of the farmers from the locust attacks. Locust Attack: What Happens When This Pest Invades Farms? Know All About The Worst-Ever 'Tiddi Dal' Attack.

In Uttar Pradesh, a sudden movement of locust swarm was spotted in the outskirts of Jhansi district last week. The district administration has been put on alert and has directed the fire brigades to remain on standby with chemicals. Deputy Director Agriculture Kamal Katiyar was quoted by IANS saying that the swarm of locusts is moving is small in size and there are reports that nearly 2.5 to 3-kilometre long swarm of locusts has entered the country.  Locust Swarms Invade 16 of 33 Districts in Rajasthan Leaving Farmers Worried, More Areas Likely to Be Affected.

In Madhya Pradesh, locust swarms were spotted in Malhargarh, Mandsaur district on Sunday. Manoj Pushp, Mandsaur District Magistrate said scientists from central locust team and agricultural science department conducted an exercise & removed around 60% of them by spraying. Several users on micro-blogging site Twitter posted pictures and videos of the 'tiddi dal' attacks (locust attacks), prompting authorities to come up with measures to tackle the issue.

Take a Look at the Videos of Locust Attacks in India:

Noise and Crackers Scare Locusts Off in Jaipur

I know how this sounds- but we have just had a massive attack of LOCUSTS in Jaipur. Apparently noise and crackers scare them off. #infestation #Locusts #jaipur pic.twitter.com/PpZvOp6GXP

Locust refers to a large group of a grasshopper species which invade a region in a swarming stage and devastate crops. This stage can lead a swarm of locust having over a billion individual inspects. This year in February,  swarms of locusts attacked Iran while a state of emergency was declared in Pakistan due to the locust menace. These locusts travel with the wind making it possible to anticipate their arrival and take preventive measures before they begin the devastation.

The Food and Agriculture Organisation (FAO) of the United Nations had in February 2020 warned India about a twin invasion of desert locusts coming to the country starting in May. The FAO had said that the world is facing one of the worst infestations of locusts in decades and that could put millions of people, especially in Africa, at risk of starvation.

(The above story first appeared on LatestLY on May 25, 2020 11:59 AM IST. For more news and updates on politics, world, sports, entertainment and lifestyle, log on to our website latestly.com).