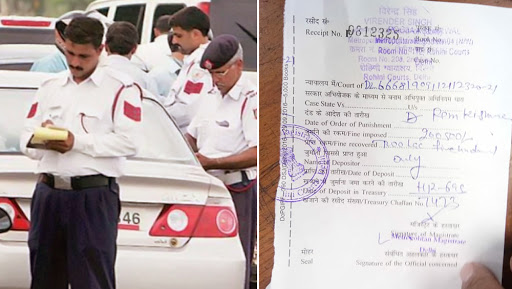 New Delhi, September 12: With reports of hefty fines imposed by traffic policemen across the country pouring in, another record-breaking fine of Rs 2,00,500 has been issued against a truck driver for overloading in the national capital on Thursday. The incident took place at Mukarba Chowk of New Delhi and this is the highest fine imposed by any policemen in the country, post-application of new Motor Vehicle Act 2019. Motor Vehicles Amendment Act 2019: Rs 1,41,700 Challan Issued to Truck Owner for Overloading, Highest Ever Under New MV Act.

According to the information, the truck driver was challaned Rs 56,000 for overloading, and Rs 70,000 for other traffic violations. Apart from this, the owner was fined Rs 74,500 for various violations, amounting to a combined total of Rs 2,00,500. Until the last report, the total amount was paid by the owner of the truck.

Here's the tweet of the challan issued and break-up:

UPDATE: The truck driver was challaned Rs 56,000 for overloading, and Rs 70,000 for other traffic violations. Owner of the truck was fined Rs 74,500 for various violations, amounting to a combined total of Rs 2,00,500. The total amount was paid by the owner of the truck. https://t.co/mXpjSLNB73

Earlier on Tuesday, another report arrived when a truck owner from Rajasthan was issued a challan of Rs 1,41,700. News agencies informed that the truck owner paid the penalty at Rohini court on September 9 for overloading the truck on September 5. New Motor Vehicles Act: List of States Where Hefty Fines Are Not Enforced.

A similar incident took place in Odisha, where a truck was fined Rs 86,500 by the Sambalpur Regional Transport Office (RTO). The fine, however, was settled in Rs 70,000 after the driver produced some documents.