During the inquiry, cops found that the accused had two number plates in his name. 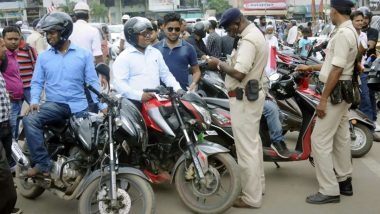 According to a report in the Indian Express, the incident came to light after traffic police constable Latif Shaikh (47) filed a complaint against the accused. On April 29, Shaikh, who was stationed at the Lucky junction on S V Road in Bandra (West) spotted a biker driving without a helmet. Mumbai Shocker: 32-Year-Old Man Arrested for Whistling, Passing Lewd Comments at Woman in Andheri.

When stopped and asked for a license, the accused identified as Sayyad Ramzan said that he was not carrying it. Following this, Shaikh cross-checked his device in order to ascertain if the biker had any pending e-challan.

When no record showed up, the constable understood that the accused had forged the number plate. Sources from the police said that the accused, who is a resident of Gavdevi Road in Dongri (West) runs a small mobile phone business.

During the inquiry, cops found that the accused had two number plates in his name. Both the bike numbers had e-challans worth Rs 14,300 and Rs 10,000 pending. Post this, the cops checked the chassis number of his bike which then revealed the real number plate. COVID-19 in Maharashtra: RT-PCR Test Made Mandatory for Patients Before Surgeries in Aurangabad.

The accused was then taken to Bandra police station where the cops filed an FIR against him. The accused was booked under sections 420 (cheating), 467(forgery of valuable security), 468 (forgery for cheating), and 471 (using genuine as fraud) of the IPC.

(The above story first appeared on LatestLY on May 03, 2022 07:39 PM IST. For more news and updates on politics, world, sports, entertainment and lifestyle, log on to our website latestly.com).