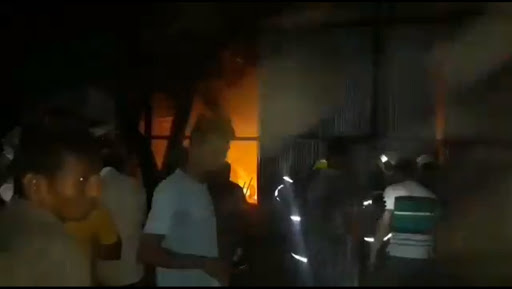 A screenshot of fire at Chembur in Mumbai. (Photo Credit: Twitter)

Mumbai, March 26: A major fire erupted at a slum in Siddharth colony of Chembur of Mumbai on Tuesday evening. Soon after the incident was reported, fire tenders were rushed in and are currently trying to douse the fire.

As per the initial reports, the fire is expected to be of Level 2 and occurred at Siddharth colony in KM Gaikwad Marg, near Aditya Birla ladies hostel, of Chembur around 8:33 pm. Though no injuries have been reported as of yet, emergency services have reached the spot. Police have cordoned teh area for safety reasons and have diverted the traffic for fire tenders to rescue the people. Mumbai Fire Brigade Raids Cricket Club of India, Bombay Gymkhana in Its Drive Against Fire Safety Norms Violations.

Though the reason of fire is uncertain, eyewitness expects that it could have caused due to cylinder blast. Police and the emergency services like four fire engines, 1 JT, police personnel, 108 ambulances & ward staff have been pushed to control the situation.