In its seven-day forecast, the weather agency has said that the city will receive thundershowers till June 14 which will start in the evenings. 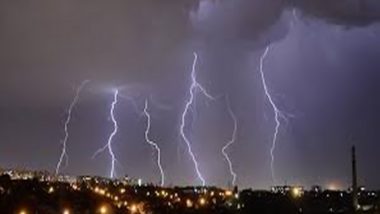 According to the India Meteorological Department (IMD), Santacruz East recorded 41.3 mm of rainfall which is categorised as 'Rather Heavy' rainfall, reports Indian Express. The showers which began on Friday late evening continued till 8.30 am on Saturday. Mumbai Rains 2022: 'South-West Monsoon Has Arrived in Mumbai & Other Nearby Areas', Says IMD.

South-West monsoon has arrived in Mumbai and other nearby areas today, IMD announces.

As per IMD's weather forecast, the pre-monsoon showers in Mumbai will continue till June 15-16. In its seven-day forecast, the weather agency has said that the city will receive thundershowers till June 14 which will start in the evenings.

Earlier, the IMD and Skymet had stated June 11 as the official date for the onset of monsoon in Mumbai. While the city received the heaviest pre-monsoon showers, areas of South Mumbai received moderate to heavy rain coupled with lightning on Friday night.

Pre #Monsoon #rains over #Mumbai will soon turn into Monsoon rain as #monsoon has almost made an onset over #Mumbai. #Monsoon2022 @SkymetWeather @JATINSKYMET @mybmc

The Colaba observatory in South Mumbai recorded 61.8 mm of rainfall in the last 24 hours ending at 8.30 am on Saturday. On Saturday morning, a cloudy sky and light rains were recorded across the city.

According to a Skymet report, water logging and flash floods were reported at Bhandup Sonapur Junction while huge traffic jam was observed over the LBS Road. "We expect light to moderate rain with one or two intense spells to occur over Mumbai and suburbs for another 24 hours," Skymet said.

(The above story first appeared on LatestLY on Jun 11, 2022 05:16 PM IST. For more news and updates on politics, world, sports, entertainment and lifestyle, log on to our website latestly.com).