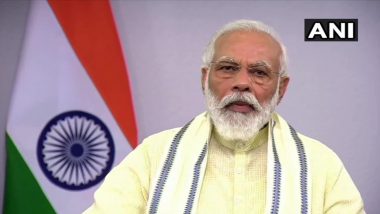 New Delhi, August 7: Prime Minister Narendra Modi on Friday addressed the ‘Conclave on transformational reforms in higher education under National Education Policy' via video conferencing. During his virtual address, PM Modi said that the new NEP was approved after an extensive discussion over three-four years and deliberation over lakhs of suggestions. The premier further said that the new NEP has given special focus on the area to ensure that India is a superpower. He also called it a foundation stone of New India.

"National Education Policy is being discussed across the nation today," the Prime Minister said, adding that "people from different fields and ideologies are giving their views and reviewing the Policy. It's a healthy debate. The more it is done, the more it will be beneficial to the education system of the country." New National Education Policy 2020 FAQs: From Implementation to Changes Made to 10+2 Schooling System, Board Exams, Teaching Qualification, All Questions Answered.

After the new NEP came, "no section of the country said that the Policy has any bias," PM Modi said, adding that "It is a matter of happiness." Calling New Education Policy the foundation of new India, PM Modi said that the "NEP has given special focus on the areas to ensure India is a superpower and is at the new heights of development and provide the people of India with new and best opportunities."

"Every country goes ahead by connecting its education system to its national values and reforming it as per its national goals. It's aimed at keeping its present and future generations future-ready," he added.

He further said that there were no major changes in our education system in the past few years "It caused our society to encourage herd mentality, instead of curiosity and imagination. How can youth develop critical & innovative ability if there's no passion in our education, no purpose of education?" Modi said.

The Prime Minister said that till now we focused on what to think but New Education Policy 2020 focusses on 'how to think'. "There's no dearth of info and content in the time in which we're today. The effort is to lay emphasis on inquiry based, discovery based and analysis based ways to help children learn," he said.

The conclave was attended by Education Minister Ramesh Pokhriyal Nishank, former Indian Space Research Organisation (ISRO) chief who also headed the committee which drafted the NEP, and vice-chancellors of several universities, Principals of colleges and other stakeholders. The new education policy proposed sweeping major changes in school and higher education.

(The above story first appeared on LatestLY on Aug 07, 2020 11:38 AM IST. For more news and updates on politics, world, sports, entertainment and lifestyle, log on to our website latestly.com).