The Delhi Police has already got non-bailable warrants issued against Mumbai-based lawyer-activist Nikita Jacob and engineer Shantanu who the police say are key figures along with Benguluru-based climate activist Disha Ravi, in drafting the 'Toolkit'. 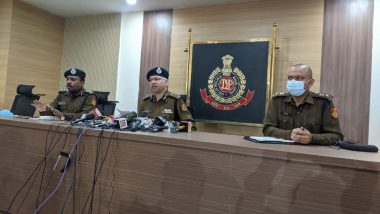 New Delhi, February 15: Elaborating on the 'Toolkit' investigation, the Delhi Police on Monday said that on January 11, Nikita and Shantanu attended a virtual Zoom meeting organised by the Poetic Justice Foundation in which the modalities of the 'Global Day of Action' were worked out and based on the course of action decided in the meeting, Nikita Jacob, Shantanu, and Disha Ravi and others collaborated together to draft the 'Toolkit' document.

The document that they drafted had secessionist and pro-Khalistan content embedded into it through links and texts, the police said. The Delhi Police has already got non-bailable warrants issued against Mumbai-based lawyer-activist Nikita Jacob and engineer Shantanu who the police say are key figures along with Benguluru-based climate activist Disha Ravi, in drafting the 'Toolkit'.

During the investigation, many screenshots of this document available on open source were investigated by Delhi Police's Cyber Cell. "The main aim of the 'toolkit' was to create misinformation and disaffection against the lawfully enacted legislations. The 'toolkit' sought to artificially amplify the fake news and other falsehoods and also sought to precipitate action on January 26, India's Republic Day," said Joint CP Cyber cell Prem Nath. Greta Thunberg 'Toolkit' Case: Delhi Police Issues Arrest Warrant Against Mumbai-Based Lawyer Nikita Jacob.

Based on incriminating evidence collected from Disha's device and in view of the fact that she has deleted her WhatsApp group, she was arrested in the case, the police said.

As soon as the investigation was able to fetch enough information, a search warrant was obtained from the court on February 9 against Nikita Jacob, one of the editors of the 'Toolkit' Google document.

A team headed by the Investigating Officer in the case reached Mumbai and conducted searches at Nikita's house on February 11 after due intimation to Mumbai Police. Two laptops and an iPhone were found during the search along with several incriminating documents.

The investigating team asked Nikita to make herself available at her house the next morning. As per police she gave a written undertaking to remain present at her house.

Based on the information gathered from searches at Nikita's house, separate teams were sent to Maharashtra's Beed district and Bengaluru, Karnataka, for investigation regarding Shantanu and Disha.

"The initial examination of Nikita revealed that she and her associates, Shantanu and Disha, had created the Toolkit Google document. The email account created by Shantanu is the owner of this document and all others are its editors," said Manishi Chandra, DCP Special Cell.

The police said that Mo Dhaliwal, the founder of Canada-based pro-Khalistan outfit Poetic Justice Foundation, had contacted Nikita through his colleague Puneet, a Canadian citizen, to create a storm on Twitter ahead of Republic Day.

Police said the woman named Puneet, who is based in Canada, connected these people to the Poetic Justice Foundation and through them, created the Google Toolkit documents titled 'Global Farmer Strike' and 'Global Day of Action, 26 January'. Greta Thunberg Tweets Updated Version of Google Doc ‘Toolkit To Support Farmer Protests’ in India After Backlash.

According to Delhi Police, one portion of this Toolkit document mentioned action points named 'Prior Action', 'Digital Strike through Hashtags' on January 26 and earlier and creating a tweet storm from January 23 onwards. It included physical action on January 26 and entering Delhi for the farmers' tractor rally and return back to the border.

The Delhi Police further elaborated that the second part of the same document mentions tasks such as disruption of India's cultural heritage such as 'Yoga' and 'Chai' and targeting Indian embassies abroad in various capitals.

"The time-bound action points and programme given in this 'Toolkit', when viewed in the context of the actual developments in Delhi, clearly showed that the action plan that was formulated in the 'Toolkit' document has been executed in exactly the same manner," said Anyesh Roy, DCP, Cyber Crime.

The police also said that it was Disha Ravi who sent the 'Toolkit' document to global climate activist Greta Thunberg through Telegram app. On being asked if the investigation would reach across borders, Delhi Police officials said that the probe would take place as per the law.

(The above story first appeared on LatestLY on Feb 15, 2021 07:56 PM IST. For more news and updates on politics, world, sports, entertainment and lifestyle, log on to our website latestly.com).