Delhi Police on Monday issued an arrest warrant against Mumbai-based lawyer Nikita Jacob in connection with Greta Thunberg's "toolkit" case. The Mumbai-based lawyer is currently absconding. The police also visited the residence of Jacob and analysed her electronic devices. The warrant was also issued against another activist Shantanu. 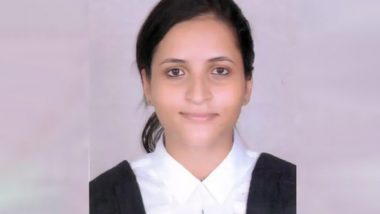 According to Delhi police, the organisation, is a Khalistani group. Poetic Justice Foundation had reportedly contacted Jacob to organise a "tweet storm" ahead of the tractor rally organised by farmers' unions on the Republic Day, reported NDTV. As per recent reports, Jacob moved to Bombay High Court seeking protection against her arrest.

The Mumbai-based lawyer is currently absconding. The police visited the residence of Jacob and analysed her electronic devices. The warrant was also issued against another activist Shantanu. Notably, charges against both the activists are not bailable. Greta Thunberg 'Toolkit' Case: Disha Ravi, Editor of Google Document, Shared It with Swedish Climate Activist, Says Delhi Police.

Delhi police on Sunday said that the 21-year-old climate activist from Bengaluru is an editor of the 'Toolkit' Google Doc and a key conspirator in the document's formulation and dissemination and she started the WhatsApp group and collaborated to draft the document. Disha, in the courtroom, told the Duty Metropolitan Magistrate that she did not make the 'Toolkit' but only "edited two lines on February 3".

However, the Delhi Police also said that she asked Greta to remove the main document after its incriminating details accidentally leaked into the public domain. The Delhi Police had registered an FIR on February 4 on charges of sedition, criminal conspiracy and promoting hatred among groups under Sections 124-A, 120-A and 153-A of the Indian Penal Code against the "creators" of the "toolkit".

(The above story first appeared on LatestLY on Feb 15, 2021 12:50 PM IST. For more news and updates on politics, world, sports, entertainment and lifestyle, log on to our website latestly.com).