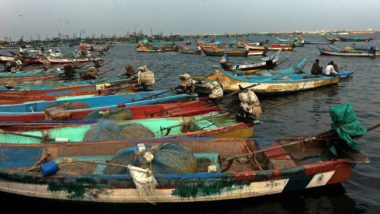 Mumbai, June 1: The western coastline stretching from Maharashtra's Raigad to the union territory of Daman will be hit by cyclone Nisarga, said a warning issued by the India Meteorological Department (IMD). Among areas that will be impacted by the "severe cyclone" would also include Mumbai - the state capital and city with maximum population density in India. Nisarga Cyclone Tracker: Cyclonic Storm to Turn Into Severe Cyclonic Storm by June 3; Check Forecast and Day-Wise Movement.

IMD director general Mrutyunjay Mohapatra, while speaking to reporters, confirmed that the entire stretch between Harihareshwar in Raigad to Daman near Gujarat will be impacted by the cyclone on June 3. The area includes Mumbai, located nearly 184 km away from Harihareshwar. "It will have an impact on Mumbai," he noted.

The 260-km coastal stretch also includes an array of populous cities apart from Mumbai. The satellite towns of Navi Mumbai, Thane, Kalyan, Ambernath, Badlapur, Vasai-Virar, Panvel and Karjat, along with the district of Palghar are also feared to be adversely affected by the cyclone.

The IMD, in a statement issued on social media earlier today, confirmed that the low pressure formed over Arabian sea has turned into a depression. The cyclone, which will turn severe over the next 48 hours, is currently 700 km away from the Mumbai coast and travelling at a speed of around 105-110 km/hr, the weather body said.

"The Low-pressure area intensified into a depression today morning. To intensify into a Cyclonic Storm and cross North Maharashtra and South Gujarat coast during 3rd June evening/night," IMD tweeted.

The cyclone is likely to move nearly northwards initially till June 2 morning and recurve north northeast wards and cross north Maharashtra and south Gujarat coasts between Harihareshwar (Raigarh, Maharashtra) and Daman during evening/night of June 3, the statement read.

(The above story first appeared on LatestLY on Jun 01, 2020 03:53 PM IST. For more news and updates on politics, world, sports, entertainment and lifestyle, log on to our website latestly.com).