Padma Shri For Adnan Sami Draws Flak, Father of Pakistan-Origin Singer Had Fought in 1965 War Against India, Point Out Twitterati

Sami was one of the 118 people whose names were announced on Saturday for the Padma Shri awards, with the Ministry of Home Affairs list showing his home state as Maharashtra. Sami was granted Indian citizenship with effect from January 1, 2016. 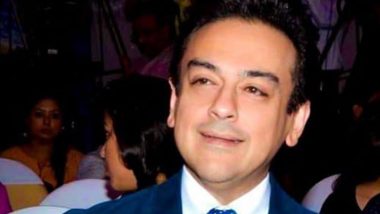 Mumbai, January 26: The Indian government on Saturday announced that singer-musician Adnan Sami will be conferred with the Padma Shri (India's third-highest civilian award). The list of Padma awardees was announced a day before the 71st Republic Day. However, netizens and Twitterverse were divided on the issue of Adnan Sami getting the Padma Shri and his nomination drew flak from many users. Twitterati objected to the fact that Adnan Sami's father, Arshad Sami Khan, fought against India in the 1965 war as PAF (Pakistan Air Force) personnel and wondered why was Adnan Sami's name chosen for Padma awards. Padma Awards 2020: Kangana Ranaut, Ekta Kapoor, Adnan Sami and Karan Johar Conferred Padma Shri.

Adnan Sami's father fought war against India and he got Padma Award and citizenship as well. pic.twitter.com/A3r7yKv2DK

Squadron leader and a War Hero for Pakistan in 1965 war, Arshad Sami Khan once said, "MIGs were falling like little birds..We've got down 9-10 MIGs, 14 aircrafts in total..

Forget everything about Adnan Sami.

Just tell me which state he belongs to?

Usually Padma awardees are identified with a state where they were born or to which they belong to.

Mohammad Sharif aka Chacha Sharif gets Padma Shree for performing the last rites of over 25,000 unclaimed dead bodies.

Adnan Sami gets Padma Shree for ...?

When @AdnanSamiLive’s father,a Pak AirForce pilot was shooting down India’s Mig aircraft in 1965 war,several Indian Muslim soldiers were fighting for India against Pak.

Now Adnan is conferred with a high civilian honour while Indian Muslims r being asked 2prove their citizenship. https://t.co/RBHXup9EN8

Sami was one of the 118 people whose names were announced on Saturday for the Padma Shri awards, with the Ministry of Home Affairs list showing his home state as Maharashtra. Sami was granted Indian citizenship with effect from January 1, 2016 after his Pakistani passport expired on May 26, 2015 and was not renewed there.

Sami, born in Lahore in Pakistan, first arrived in India on a one-year visitor's visa on March 13, 2001. He was granted Indian citizenship after he requested the Centre to legalise his status on humanitarian grounds.

(The above story first appeared on LatestLY on Jan 26, 2020 02:14 PM IST. For more news and updates on politics, world, sports, entertainment and lifestyle, log on to our website latestly.com).