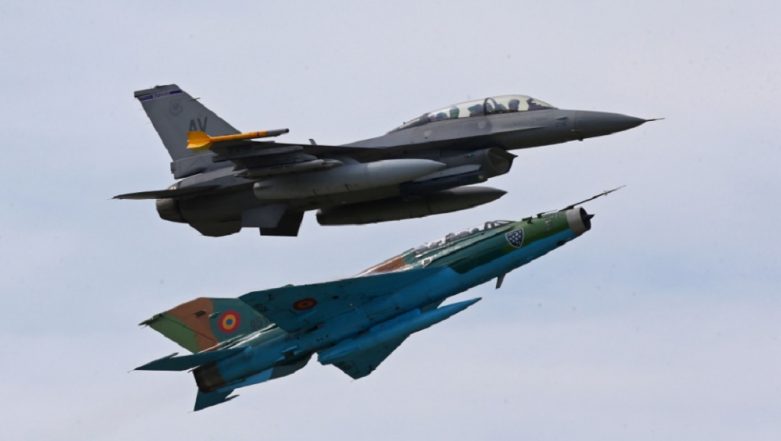 New Delhi, March 6: Pakistani fighter pilots flying their F-16 combat aircraft had fired four to five American AMRAAMs (AIM-120 advanced medium-range air-to-air missile) from a distance of 40-50 km at the Indian aircraft including the Su-30 and the MiG-21 Bison.

To expose Pakistan further on its claim of not using the F-16 planes while attacking India on February 27, Indian troops on the ground are carrying out an extensive search of probable areas where the debris of the AMRAAMs could have fallen, sources told ANI on Tuesday. Mob in Pakistan Lynched Shahaz-ud-Din, Pilot of F-16 Struck Down by IAF During Aerial Engagement: Report.

The F-16s fired four to five AMRAAM missiles from a beyond visual range distance of around 40-50 km at Indian planes including the Sukhoi in the engagement on February 27 but they all missed the target, sources said.

Once we get more parts of the AMRAAM missiles which failed to hit targets and have fallen on our side, the Pakistanis would be further exposed, they said.

The February 27 dog fight between Indian Air Force pilots and Pakistanis resulted in the shooting down of an F-16 by Indian MiG-21 pilot Wing Commander Abhinandan Varthaman, who was the only pilot who fired at Pakistani aircraft from the Indian side in the engagement.

The entire operation took place over the skies of Rajouri district of Jammu and Kashmir after the Pakistanis made a failed attempt to target Indian military targets in Nowshera sector.

The Pakistani Air Force (PAF) probably had the intention of pounding a brigade headquarters, a battalion headquarters, and an oil dump, sources said.

India has already shown parts of one AMRAAM missile fired at Indian planes during a press conference on February 28 and more evidence in this regard would create issues for Pakistan. India has also shown the evidence to the American Defence Attaché in India and has informed him about Indian concerns in this regard.