Pakistani Woman Intruder Who Was Shot at by BSF in Punjab, Dies

According to reports, the 32-year-old woman identified as Gulshan, breathed her last after her blood pressure dipped drastically on Friday and later, she succumbed to her injuries. 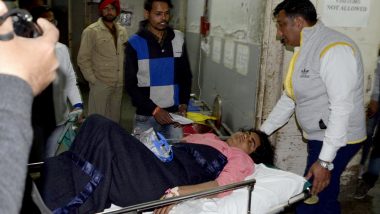 Chandigarh, February 22: A woman intruder from Pakistan, who was shot at and injured by Border Security Force (BSF) troopers, passed away in an Amritsar hospital on Friday. According to reports, the 32-year-old woman identified as Gulshan, breathed her last after her blood pressure dipped drastically on Friday after which she succumbed to her injuries. On Wednesday,  the BSF had shot her in the Dera Baba Nanak sector of Punjab's Gurdaspur when she was trying to enter the Indian territory. The body of the woman is being kept at the morgue and a post mortem will be done on Saturday, reports said. Pakistan Intruder Apprehended By BSF In Punjab, Shifted To Hospital.

According to reports, Gushan was attacked when the she tried to move into Indian territory along the International Border(IB) between India and Pakistan near the Bangar border outpost (BoP) of BSF. Reports inform that officials said she was warned by them to stop and go back but she kept walking. Jammu & Kashmir: Pakistani Intruder Who Tried to Enter India on Republic Day 2019 Shot Dead by BSF.

A police official added saying that the woman was shifted to the government hospital in Dera Baba Nanak town, 275 km from Chandigarh. The woman was being questioned, a police official said. BSF officials said she was challenged by troopers to stop and go back but she kept walking. However, the BSF jawans had to open fire at her as part of their security protocol.

(The above story first appeared on LatestLY on Feb 22, 2019 03:16 PM IST. For more news and updates on politics, world, sports, entertainment and lifestyle, log on to our website latestly.com).