Police said on May 30 the accused fed Anjan Das liquor mixed with sleeping pills and later murdered him by slitting his throat and left the body at home for a day for the blood to drain out completely. 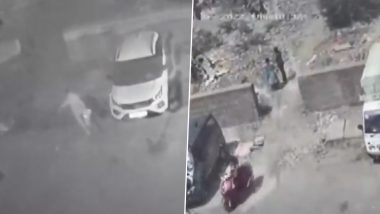 Delhi, November 28: Investigation in Shraddha Walkar murder case is still underway and Delhi police crime branch have cracked a similar crime in the national capital. Delhi Police crime branch have arrested a woman in east Delhi's Pandav Nagar for allegedly murdering her husband with the help of her son from a previous marriage. Now shocking details of the crime has emerged.

Reports said that the accused woman identified as Poonam and her son Deepak has confessed to the crime. Poonam's former husband died of cancer in 2017, after which she had started living with Das The woman said that she was furious after she learnt that her husband Anjan Das had sold her jewellery and sent the money to his first wife, who lived in Bihar with their eight children. The couple used to fight regularly. Delhi Horror: Man Kills Father With Mother’s Assistance in Trilokpuri, Cuts Body Into Bits and Stores Pieces in Fridge; Arrested (Watch Video)

A woman along with her son arrested by Crime Branch in Delhi's Pandav Nagar for murdering her husband. They chopped off body in several pieces,kept in refrigerator & used to dispose of pieces in nearby ground: Delhi Police Crime Branch

Victim Was Killed in May:

Police said on May 30 the accused fed Anjan Das liquor mixed with sleeping pills and later murdered him by slitting his throat and left the body at home for a day for the blood to drain out completely. They chopped the body into 10 pieces by using a knife and another sharp weapon which was disposed of over several days. Delhi Horror: Woman, Son Arrested for Killing Husband, Chopping Body Into 22 Parts in Pandav Nagar (Watch Video)

Body Was Kept in Fridge:

Police said that the accused than kept the body in the fridge and later painted the house to avoid the obnoxious smell. A video has also surfaced which shows the accused mother-son duo walking with a bag in his hand late at night to throw away one of the pieces. The police, however, have recovered six parts of the body.

A case was registered under sections 302 (murder) and 201 (causing disappearance of evidence and giving false information) of the Indian Penal Code (IPC) at Pandav Nagar police station.

(The above story first appeared on LatestLY on Nov 28, 2022 05:16 PM IST. For more news and updates on politics, world, sports, entertainment and lifestyle, log on to our website latestly.com).