Prime Minister Narendra Modi on Friday arrived in Leh amid ongoing border standoff with China in eastern Ladakh. PM Modi along with Chief of Defence Staff General Bipin Rawat reached Leh on Friday morning to take review prepared of the Army in the region. 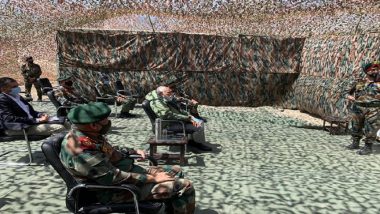 It is the first visit of the Prime Minister to the union territory after June 15 clash of Indian Army troops with People’s Liberation Army (PLA) soldiers. In the violent face-off, 20 Indian soldiers were martyred, while there were reports that 45 Chinese troops were killed or severely injured. According to reports, PM Modi is likely to meet soldiers who sustained injuries during the violent face-off which took place at patrolling point 14 in Ladakh’s Galwan Valley. China Failing to Silence Upset Families of Soldiers Killed in Galwan Valley Face-Off: Report.

Prime Minister Narendra Modi makes a surprise visit to Ladakh, being briefed by senior officials at a forward position in Nimu. pic.twitter.com/8I6YiG63lF

The official statement read, " reached there early in the morning. He is interacting with personnel of the Army, Air Force and ITBP (Indo-Tibetan Border Police). Located at 11,000 feet, this is among the tough terrains, surrounded by the Zanskar range and on the banks of the Indus."

The situation at the India-China border remains tense after 20 Indian soldiers lost their lives in a violent face-off in the Galwan valley on June 15-16 when Chinese troops attempted to change the status quo unilaterally during the de-escalation. Both the countries have been involved in talks to ease the ongoing border tensions since last month.

(The above story first appeared on LatestLY on Jul 03, 2020 10:32 AM IST. For more news and updates on politics, world, sports, entertainment and lifestyle, log on to our website latestly.com).