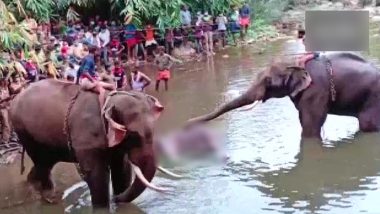 The explosion had severely injured her tongue and mouth but the elephant remained calm. The elephant then walked to Velliyar River and stood with her mouth and trunk in the water. Forest officials brought two elephants to bring her out but she died on May 27. Kerala: Pregnant Elephant Allegedly Fed Pineapple Stuffed with Crackers Dies in Pallakad.

Dr David Abraham, who conducted post-mortem said that he was moved by holding foetus of the baby in its hand. "Initially, none of us was aware that the elephant was pregnant. After I had seen its heart and then happened to see the amniotic fluid did I realize that it’s pregnant,” Abraham told The New Indian Express.

The death of the 15-year-old elephant has caused huge outrage, with thousands calling for strict action against the perpetrators. Police officials have launched an investigation to catch the culprits.

(The above story first appeared on LatestLY on Jun 03, 2020 01:24 PM IST. For more news and updates on politics, world, sports, entertainment and lifestyle, log on to our website latestly.com).